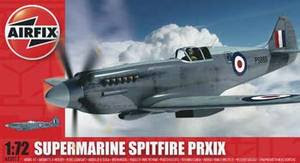 Last Thursday a small box was left on my doorstep with an English postmark. Within it contained two of kits I had been eagerly awaiting, the new Airfix Spitfire XIX and BAe Hawk, both in the divine scale, of course.

While there have been a few cracks at the Spitfire XIX in 1/72, all have left something to be desired. The MPM kit is from the early days of short run models and there is more flash then kit on the sprues. The Academy kit is boxed as a Spitfire XIV, but looks like a Spitfire on steroids, with a multitude of shape problems and a general bloated attitude. The Fujimi Griffon Spitfire family was the best of the bunch, but has a five piece fuselage, five piece wings, and rather poor fit. How does the Airfix kit stack up?

First off the Airfix kit is a Spitfire XIX out of the box. It is not an in-box conversion of an XIV to an XIX like the Fujimi kit. No panel lines on the wings to fill and no camera ports to drill out. The shape is good, no goofy humped high back fuselage as in the Fujimi kit, and Airfix correctly noticed that Griffon Spitfires have a retractable tail wheel. Molding is quite crisp with only a little flash on the rudder. Options include three and four hub wheels, retracted or extending landing gear, and a rather small wee pilot. Detail is simplified, but for the most part acceptable for a cheaper 1/72 scale kit. Panel lines are engraved, and some comments have been made that they are too deep. I think they are acceptable, and look much like the engraved lines you see on Tamiya aircraft. Not as petite as Hasegawa engravings, but not too overstated. The instructions are clear, and a colour decal guide is included. Decal options include a Medium Sea Grey over PRU Blue RAF Spitfire from Malaysia, and an overall PRU Blue Swedish Spitfire. The decal sheet is well printed, but very simple with only the basic markings including. The clear parts are perfectly clear, but the canopy is molded in one piece.

However, not all is perfect.

1. The wheel wheels are not boxed in and there is no internal detail.

2. The landing gear legs and doors are molded in one piece. Many find this a crime against humanity. It is a little cheap, but with some careful painting, I think all will be ok.

3. The propeller is a little anemic.

4. There is no detail on the instrument panel and no decal is included. Ouch. Somebody at Airfix must have been asleep that day.

7. No slipper tank is included. This is about the only option that Fujimi included that Airfix missed.

Overall, this is a great simple kit. A quick build with good shape, that really would be benefited by a Eduard Zoom set that includes an instrument panel, some wheel well detail, and a few other simple details. Wonder if we will see a Spitfire XIV from Airfix sometime in the future?

My kit will shortly proceed to the workbench to be finished as Spitfire XIX PM627 as it appeared while on display with the Canadian Warplane Heritage in the mid 1970s.
on August 04, 2009
Email ThisBlogThis!Share to TwitterShare to FacebookShare to Pinterest
Labels: Airfix, Spitfire

we shall see how the transfers fair up from my experiances with Airfix transfers since Hornby got them things have gone from bad to worse with them, I converted 2 Academy XIV's to XIX's when I built the RAF Battle of Britain Mermorial Flight and I have to say I am very pleased with the result, good luck on your build.

Thanks for the review. I just picked one up myself, and I have to agree with much of what you say.

The gear wells should be simple to dress up with some styrene strip, and as for the instrument panel...not much will be seen through the glass, and with the wee man in there.

I would like to add that the fit of the upper wings is a bit dodgy, and the trailing edges need a bit of sanding to fair them in. Nothing complicated.