Do we need to chip in and buy the RCAF some Micro Set? 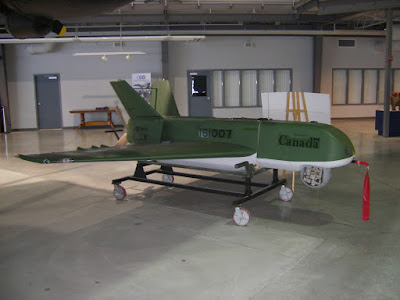 We modelers spend lots of time applying a good gloss coat and using decal setting solutions to make our decal film disappear.  But what does the RCAF do? Apparently nothing; just look at all that silvering! The subjects are CU-161 Sperwer RCAF 161007 on display at the National Air Force Museum of Canada at CFB Trenton (above) and CU-161 Sperwer RCAF 161001 sitting on its trolly in Kabul in 2003 (below).  The RCAF operated a fleet of fleet of 30 CU-161s in Afghanistan from October 2003 until April 2009.  Upon retirement, many were placed in Museums across Canada. 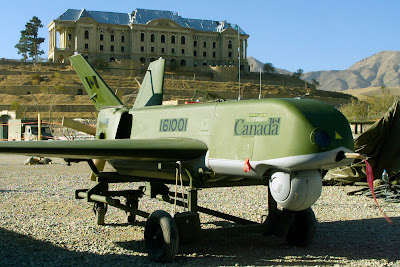 (Lower photo courtesy of the Canada. Dept. of National Defence.)

Modeler's Note:  As far as I know, the French designed and built SAGEM Sperwer has not been kitted in 1/72.
on August 08, 2017
Email ThisBlogThis!Share to TwitterShare to FacebookShare to Pinterest
Labels: RCAF History

Jim, one of these days I am going to build a large scale aircraft model.
I will build it with all the "gloss here" and "flat there" as it should be. And then paint the stencils that were painted and put decals on that you can see stand out like they did on the real thing.

And enter it in a contest, and walk away with 43rd place while 3 others take the top awards for "being more realistic" in appearance.

Crazy Canadians. BTW. that is one ugly UAV.