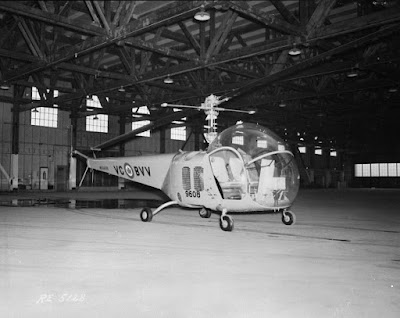 Here is an interesting one. I knew the RCAF (and RCN) flew the later Bell HTL, but I had no idea they also had one of the covered versions (H-13B?) on strength. Shown in 444 Squadron markings, the photo of 9608/BV-V was taken at Rockcliffe on March 27, 1950. (Photo courtesy of the Canada. Dept. of National Defence/Library and Archives Canada/PA-066300.)

Modeler's Note: There have been a few kits of the Bell 47G in 1/72, of which the Italeri kit is the best.  To the best of my knowledge the earlier Bell 47s have not been kitted in plastic or resin.
on September 24, 2016
Email ThisBlogThis!Share to TwitterShare to FacebookShare to Pinterest
Labels: RCAF History