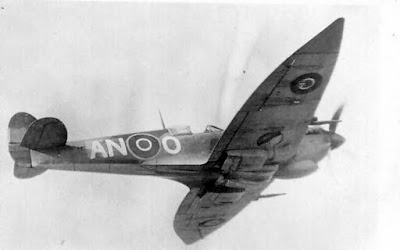 A question for the Spitfire cognoscenti. Above is a Library Archives Canada photo of 417 Squadron Spitfire VIII AN-O. 417 Squadron was the only RCAF fighter squadron to operate as part of the Desert Air Force and flew a mix of Spitfire VIIIs and later IXs. What is of note in this photo is what appears to be a very non-standard filter. (It sure looks to me that it is a cross between the Spitfire Vb/c Volkes filter and the more standard Aero Vee of the Spitfire VIII.) Most of the photographed aircraft feature the normal filter that one expects to see on the VIII and later IXs. The second photo (taken from the internet) below of Spitfire JF328 which appears to show the same item as on AN-O. A search of the internet doesn’t bring up much on the topic. (I know some IXs were fitted with the Aboukir filter, but this isn't an Aboukir filter.) However, there was a post on BritModeller by Magpie referencing two types of filters:

"The Aero-Vee filter came in two versions. Once again I quote from the pilot notes, (Spitfire VIII): 'On early aircraft the filter in the air intake can be bypassed, in the event of it becoming choked, by moving the control lever in the cockpit from COLD to HOT. Unfiltered air is then admitted from the engine bay.’ In other words, air was passed through the filter all the time as in the Vokes filter. The notes continue: 'On later aircraft the normal air intake (OPEN position of the control lever) is not filtered and is used at all times except for take-off and landing on sandy or dusty aerodromes, or when flying through sand storms, when the CLOSED position should be used. Filtered air is then taken from the engine bay'. There appear to have been two different types of air filter intake. The early intake seems to have operated the same as the Vokes type. Was it a Vokes and not an Aero-Vee? Is this the larger fairing seen on JF299 on page 279 of 'The History'? How many aircraft were so fitted? The three drawings on page 282 all seem to depict versions of the later Aero-Vee filter when 'ram' air was feed to the engine. Still more research needed!”

So is the filter on AN-O the early filter? If so, is there more documentation/photos out there?
on September 22, 2016
Email ThisBlogThis!Share to TwitterShare to FacebookShare to Pinterest
Labels: Spitfire

I believe this is the”Aboukir” filter,