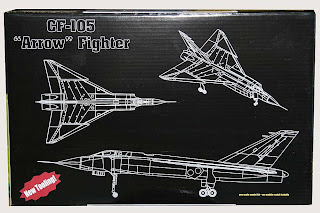 Over that last year or so, it has been interesting to read online "experts" write about how Hobbycraft of Canada is "kaput" or has gone out of business. I'm sure if they were paying attention, or cared about 1/72 scale, they would have been shocked to learn of this new tool Avro Arrow. One of the first kits issued by Hobbycraft in the 1980s was an 1/72 Arrow; sadly it was less than spectacular in shape and detail and was underscale. It was retooled a few years later to correct the most glaring of mistakes, but was still too small to accurately considered a 1/72 scale model.

So now we have a brand new kit. Overall it is a huge improvement over the earlier kit, and seems to bear quite a resemblance to the 1/48 scale retool from 2002/2003. Detail is still sparse, but much better than the earlier kit, and the engraved lines are a tad soft.  There is a nice inbox and build review here.  While I laugh that the poster considers the box art a con...really who cares, the drawings look like an Arrow...I agree with his comments about the horrible instructions (odd looking and many mis-numbered parts) and red ensign on the decal sheet.  Also, he is quite correct that the kit is overpriced.  I paid $30 (Canadian) for mine, and while it is a decent kit and a huge improvement over any other injected plastic Arrow, it does not compare well to certain other kits in its price bracket.  Now how about a retool of the CF-100?

Look for this one to hit the workbench soon...I hope...
on June 23, 2012
Email ThisBlogThis!Share to TwitterShare to FacebookShare to Pinterest
Labels: Avro Arrow, In Box Review