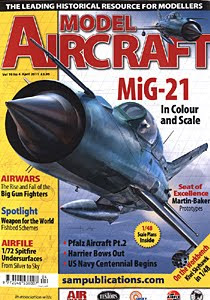 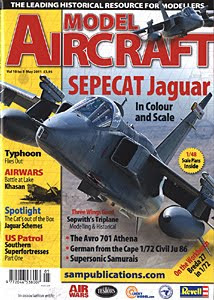 The May issues features Jaguars, with a nice Devil Scale build of the Airfix kit by Bill Clark. 1/72 scale features include a South African JU-86 and the AZ Breda 27. The Roden 1/32 Sopwith triplane is paired with a short feature on the real Triplane along with some scale planes. The esoteric history feature of the month is on the Battle of Lake Khasan, there is an article on the Avro Athena, and finally there are nice photo features on the Japanese F-1 and F-2, and some RAF Typhoons going off to war. The proof reading is better, but not perfect and again six pages are wasted on the Kit New section. But issue two is an improvement on issue one.
Overall, there is some potential here. Neither magazine rises to the level of the Neil Robinson edited years, and at times the topics just seem thrown together, but things are much better then the pointless Military Aircraft Monthly issues of 2010. Now if only they would hire a proof reader and not change the name every few months...
on June 14, 2011
Email ThisBlogThis!Share to TwitterShare to FacebookShare to Pinterest
Labels: Magazine Review