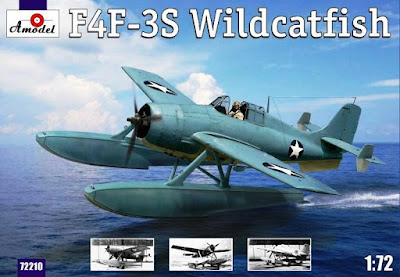 I don't know what it is about the Grumman Wildcatfish that attracts me so much. Sure I am a Wildcat fan, but no Canadian service ever operated the Wildcatfish. Maybe it is just the irony of putting on fighter on floats...and more, so putting a pudgy fighter on floats. Anyway, I'd always wanted to build a Wildcatfish, but I'm not sure that there were many options in 1/72. That has now changed.
Boxed by A-Model, I think this kit originates from their Master 44 design bureau. (Well at least that is what the sprues say.) The kit has four grey sprues and one clear sprue. The molding is quite well done for a short run kit with small sprue attachment points and little flash, but the detail is crude. In fact this kit looks totally 1970s. The first sprue includes the four floats which have almost no surface detail. The wing spure has nicely scribed lines, a few engraved rivets, and restrained fabric detail. The fuselage sprue also contains the engine and cockpit details. Again, the fuselages parts are nicely done, but the engine and cockpit detail is poor. Cockpit detail consists of a floor, small instrument panel, control column, backrest and seat bucket. Not accurate and not well done. The propellor is ok, but the engine would embarrass 60s Airfix kits. The last sprue contains the beaching gear and float supports. Again, pretty well modeled with minimal flash, but crude detail. The clear canopy looks funnily shaped to me, is thick, with poorly defined frame lines and some dimples. Not at all state of the art. Finally, you get a small decal sheet with 6 stars for the one option in USN Blue Grey over USN Light Grey. Oddly the instructions tell you to paint the underside white rather then grey.
Nothing about this kit is state of the art, except for the price. At almost $30, you better really want a Wildcatfish and be prepared for a crude 70s style kit. Maybe the best option is consider it a conversion and kitbash it with a Hasegawa Wildcat, or at least steal an engine, prop, and canopy from Hasegawa and add a True Details cockpit. But that would be one expensive model.
So now what? Do I build it as it was tested in Bethpage, or do I just throw caution into the wind and build a what-if Canadian Wildcatfish. Because, really, the RCAF should have purchased them to defend Canada and allow the senior pilots to go on fishing trips in style.
on June 12, 2011
Email ThisBlogThis!Share to TwitterShare to FacebookShare to Pinterest
Labels: In Box Review

Love the details, dude. I think I will pass on this kit!

Do you have any thoughts on the B-17 that got blowed up? What's the best B-17 kit out ther?