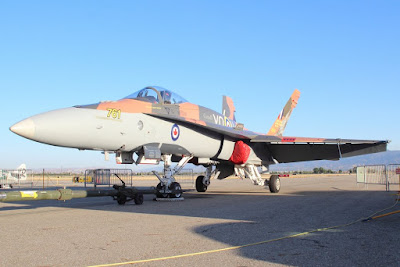 To commemorate those brave Canadian pilots, and especially those of 1 (F) Squadron RCAF, the RCAF painted up their 2015 demo Hornet in this attractive scheme. Coded YO-H, it has been painted up to memoralize Hurricane P3873 in which F/L Gordon D. McGregor was credited with the Squadron's first victory on August 26, 1940, when he shot down a Dornier Do.17 bomber. (Oddly,  there are many references to the aircraft being P3863, which is a typo first introduced in Kostenuk and Griffin's RCAF Squadrons and Aircraft. Hurricane P3868 was on strength with 73 Squadron during the Battle until it was severely damaged on September 7, 1940.) YO-H was operated by 1 Squadron until it was shot down on October 5, 1940, with Senator Hartland Molson bailing out of the aircraft. 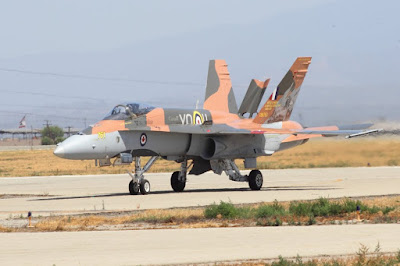 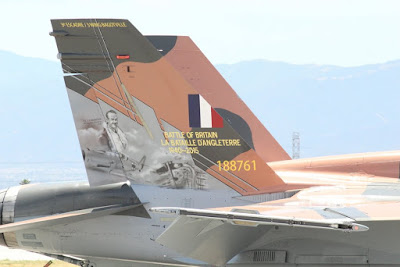 Featured on the right tail of 188761 is F/L Gordon D. McGregor. McGregor made ace during the Battle of Britain and was awarded the DFC on October 25, 1940. Later rising to the rank of Group Commander, McGregor commanded X Wing in Alaska, was base commander at Patricia Bay in B.C., and finally, lead 126 (RCAF) Wing in Europe. It has been stated that he was even flying sorties with 126 Wing as late as 1945 when he was 44 years old. After the war, McGregor was president of Trans-Canada Airlines, aka Air Canada.


CF-188 Hornet 188761 was again chosen to the "colour bird" for the 2015 display season. It had previously served as the demo bird in 2014 when it carried the "True North Strong and Free" scheme and for a while carried a 409 Squadron "Nightmare 01" scheme with tails painted up with the Squadron mascot. Hornet 188761 also has the odd distinction of having two different pilots ejecting from the aircraft, once on October 20, 1987, at RAF Alconbury and then again on June 19, 2004, at Yellowknife Airport. After both incidents, the aircraft was repaired and returned to service.


While I have not been a fan of the last few (dozen) CF-18 special schemes, I especially like this one. (I'm sure its historical connection and Hurricane content has something to do with it!) I wish the Squadron could have painted the whole jet in the Temperate Land Scheme, but there is some nice attention to detail included...especially the Hurricane wing gun patches that are painted on the leading edge slats.

Modeler's Note: Really the only CF-18 to consider in 1/72 is the Academy kit.  Canuck Models has recently reissued the kit with markings for YO-H. It appears that Hasegawa is going to be reissuing their old kit with YO-H markings in the near future, but I'd trust Canuck's research and decal art over that of Hasegawa anytime. Not to mention, the Hasegawa kit is a tough build and lacks detail. 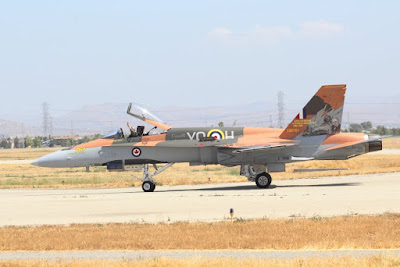 The pilot on the left tail besides Winston Churchill is Georges Nadon.
I have a whole blog dedicated to him.
Goggle Georges Nadon Spitfire pilot and find out who he was.

I wrote this blog in the two Canadian official languages.