Within the last month there have been a couple of discussions on the Hyperscale Plane Talk forum about Spitfires and their flaps down on the ground. One poster went so far as to state "No flaps down, unless undergoing maintenance." I hate absolutes, so how about this pic of Spitfire L1090 visiting CFB Trenton on June 6, 1940? 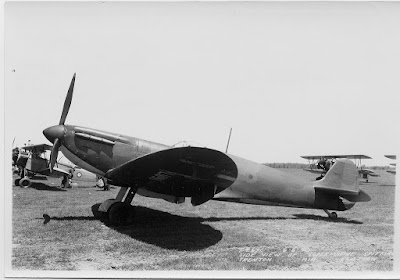 Could those be flaps down? On the ground? And I don't see any maintenance personal nearby. Which of course there wouldn't be, as the Spitfire would have been worked on at its home base in Rockcliffe. (Photo courtesy of the Canada Department of National Defence/Library and Archives of Canada.)

Modeler's Note: Spitfire L1090 was an very early Spitfire Mk.I and it has the early unarmoured windscreen and pole antenna, though it looks like it has the blown canopy. Right now only two 1/72 Spitfires Mk Is have the early windscreen included, the old, crude, and poorly shaped 1970s Hasegawa kit and some boxings of the recent short run AZ kit. However, all is not lost, as Airfix will reissue their Mk. I later this year with the early canopy and spinner.
on April 17, 2011
Email ThisBlogThis!Share to TwitterShare to FacebookShare to Pinterest
Labels: RCAF History, Spitfire