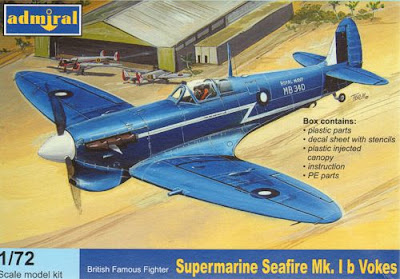 One of the kits I picked up at the Pittsburgh regional was the newly issued Admiral Seafire IB. Admiral is now an imprint of AZ Models and this kit is another boxing of the AZ Spitfire family. While from the same masters as the earlier Spitfire I series, all the necessary changes to build a "b wing" Spitfire V have been made. The kit is pretty much a early generation short run product. With a little clean up most of the parts will be quite usable and the scribing is very fine and petite, maybe too much so. Shape looks pretty good. The canopy is injected and a little thick and cloudy. Cockpit detail is good for the scale, and unlike the Spitfire I kit the seat is usable. Options include clipped, standard, or extended wing tips, standard or Vokes filters, and either the Rotol or de Havilland spinners and blades. (Oddly a four bladed spinner is included, but the appropriate blades are not provided. There are four Rotol blades, but to the best of my knowledge the Spitfire VI did not use this style of Rotol blades.)

As AZ are trying to get as much out of the molds as possible, the kit has some odd quirks. For example the intake scoop of the Spitfire VI is molded on the fuselage. (The instructions do mention to remove this.) In addition, in the ongoing poor use of photo-etch in modern kits, the fuselage antenna is provided on the PE fret. Great. A flat piece of metal to represent a 3-D object. Also, the Seafire hook conversion is in PE which needs to be bent to create the hook. Again this if far from an ideal choice of material and not really much of a conversion.

Two decal sheets are provided. One for stencils, and one for the two markings options. These include Duncan Hamilton's Royal Blue station hack and a standard aircraft from 885 Squadron in the Temperate Sea Scheme.

Overall I'm a little disappointed in the kit. First off it was expensive, at $20. Also, while AZ has some interesting subjects their modelings just aren't top of the line. They remind me of MPM/Special Hobby kits of over a decade ago. That combined with the silly choice of materials and the half hearted Seafire conversion, make this a less then a great value. When all is said and done, I'll probably try to find some new propellor blades and build the kit as a high altitude Spitfire VI as operated by 417 Squadron.
on April 22, 2011
Email ThisBlogThis!Share to TwitterShare to FacebookShare to Pinterest
Labels: In Box Review, Spitfire

I'll use this one.