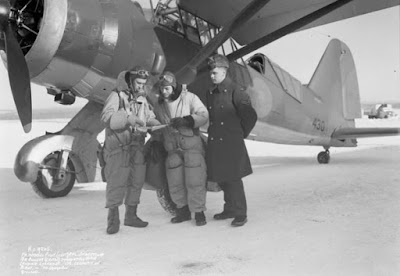 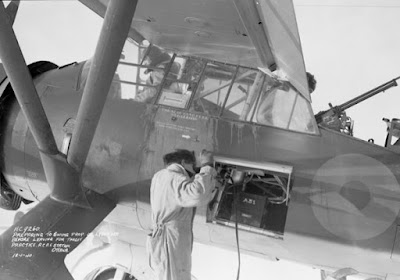 Now that there is a flying Lysander in the Ottawa region, I thought it would be best to celebrate with some archive photos of Lysanders in the Ottawa region. Both these photos are of Lysander Mk. IIs of No. 110 (AC) Squadron taken at Rockcliffe in early January 1940. No. 110 (AC) Squadron later moved to England with its Lysanders and became 400 Squadron. They did not operate the Lysanders for long and were reequipped with Curtiss Tomhawks and later still Mustangs, Spitfires, and Mosquitos. Note the two tone roundels on the fuselage and the lack of a fin flash. There is also the question of the underside colour...is that sky or did the RCAF just paint the camouflage right over the aluminum dope? That wheel spat sure does look too shiny for sky. (Photos courtesy of the Canada Department of National Defence/Library and Archives of Canada.)

Modeler's Note: Still to this day, the Matchbox (later reboxed by Revell) Lysander Mk. II is top of the class. Pavla did a short run Lysander Mk. II that had some nice resin details, but was a little too narrow in fuselage width and very expensive. Airfix's Lysander from the 1970s is sold as a Lysander Mk. III "Spy Taxi," but actually is a Lysander Mk. II with the Perseus engine. The only actual Lysander Mk. III in 1/72 was the old Frog kit, which may still be available in an Eastern Express box.
on July 13, 2010
Email ThisBlogThis!Share to TwitterShare to FacebookShare to Pinterest
Labels: Lysander, RCAF History

Nice photos as always, but the Lysander is still an ugly aircraft.

Heretic! Do not insult Lizzie.