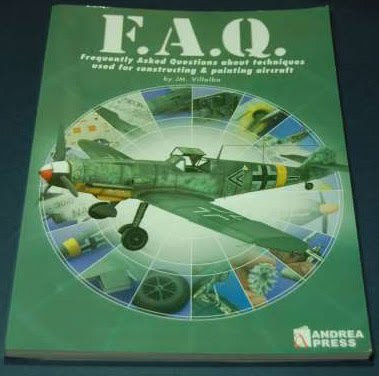 Thanks to a loan from David Knights, Kentucky Law Pirate and master modeler, I was recently able to check out Andrea Press's new book on aircraft modeling. Much like its predecessors in the FAQ series, it is a visually stunning pictorial of in-progress modeling photos in an attempt to demonstrate modeling techniques. Text is limited to a an introductory paragraph and photo captions. The final few pages of the book are a gallery of Mr. Villalba's work. All scales are illustrated, but most of the techniques are applied to larger scale models. In addition, this book is in the so called "Spanish School" of painting and over-weathering, of which I'm not a fan. Clearly Mr. Villalba is a great modeler, but this isn't really a great modeling book. Sure, it provides inspiration, but it does little to instruct the modeler on how to achieve results similar to those of Mr. Villalba. Quite honestly I picked up very few tips in this book that will help me in my modeling. The pictures are nice, but they don't teach me anything. The captions are well keyed to the photos, but there just isn't enough text to really explain how to achieve what has been done in the photo. Maybe I'm old fashioned but I buy books for text, not just pretty pictures. On the whole I found the book hollow, and a perfect example of form over substance.

on October 30, 2009
Email ThisBlogThis!Share to TwitterShare to FacebookShare to Pinterest
Labels: Book Review

Jim,
As we discussed, I agree with your assessment. My big complaint as a 72nd scale modeler is that almost all the techniques were demonstrated on 48 and 32 scale aircraft models. The "spanish scool look" doesn't really offend me, but it does tend to look cartoonish sometimes. Given how important airbrushing is to achieving some of the results shown in the book, I was surprised at how little discussion of the airbrush techniques there was.