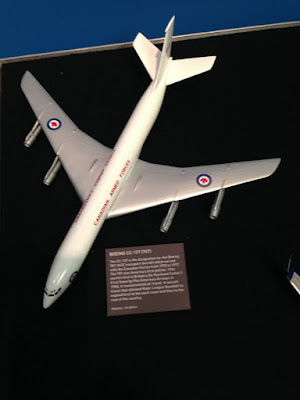 AKA...Things that Made Me Mad in March

Ever built a model so bad it killed your compressor? Yep, the 1/144 Minicraft 707 is that bad.

I bought the Minicraft 707 many years ago as I wanted a CC-137 in my collection and there is no way in hell I'd ever finish the Heller 1/72 707.  I lusted after it for many years, but after buying it mostly used it as a dog gate; the box is that big.

Anyway, with the Minicraft version and J-Bot decals in hand, I was eager to dig in after I was asked to build it for the Northwest Scale Modelers display case.

The Minicraft 707 is well known for having shape issues with the nose. Out of the box it really doesn't look right, so I ordered a Contrail replacement nose piece off eBay. I admit I tried to be ok with the kit nose, but it just looked off. At this point in the project, I still thought it had promise.  I attempted to modify the kit nose, but in the end I just tore it out and used the resin nose.  The Contrail part has a much better shape, but it doesn't really fit.  That's what filler is for, right?  So I filled, sanded, and primed.  There were flaws.  I filled, sanded, and primed again.  *&%#!, more flaws.  Again and again I repeated this cycle, as any remaining excitement ebbed away.  This was slowly becoming a masochistic experience, without any of the supposed pleasure.  I wanted this damn thing off my bench. 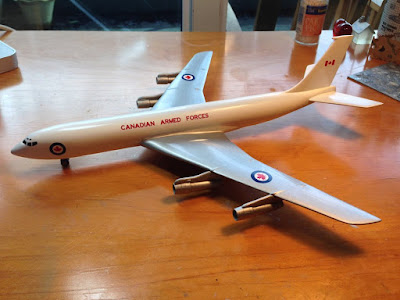 Of course, a deadline loomed large on the horizon.  If this hadn't been for a display, it would have taken a nosedive out of my highrise's window and died a pitiful death.  It would have been a justifiable homicide, too. But I persevered. At this point most of the panel lines were gone, not that they were much of a loss. The panel lines aren't to scale and like the rest of the kit, pretty crude. The wing and horizontal stabilizer fit was...meh. But I had a model that looked pretty smooth, so I primed it again. Mr. Surfacer 1200...you are not my friend. More flaws. F' you Minicraft! With only days to go, I pressed on. I did the best I could and was about to add the first coat of white when my compressor just stopped.  At first I thought it was a fuse. Nope. Maybe it just needed a nap. Nope. Turns out the 707 is so bad, it sapped my compressor's will to live.

I had no choice but to use spray cans. The closest hobby shop didn't have any Tamiya white primer, so I had to settle for Humbrol Gloss White. The first coat when down nice and glossy, but I missed a few areas on the bottom. So a few hours later I added a second coat and...disaster. The 707's surface now resembled the moon. F' you spray can! I was able to Micromesh the surface and make it less moonlike, but my fate was sealed: I was going to finish this thing, but it was going to suck.

I assembled the engines and was glad that I no longer cared how anything looked. Good thing, as the engines are horrible - they have flat intakes!  I started to apply the J-Bot decals and they were transparent.  %$#*.  "What can I do to get this thing in the case?!" No way was I going to attempt the cheat line.  I dug out some Leading Edge roundels and applied them. Of course, because this model was cursed, the fuselage roundels wrinkled up and never flattened out. I was done.

So there ends the tale of the worst model I've finished since I was ten years old. But it ended up in the Boeing Centennial display.  Maybe a few MoF visitors will look at it.   I just hope they don't look too closely!
on March 18, 2016
Email ThisBlogThis!Share to TwitterShare to FacebookShare to Pinterest
Labels: Model Gallery, Modeling

I hope that compressor disease is not contagious. Mine has been coughing up blood for years, and something like this would push it right over the edge!