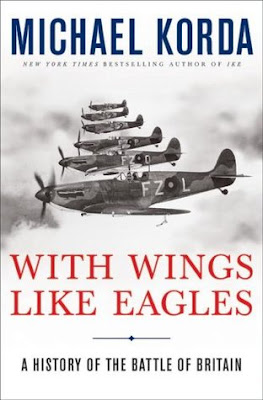 Title: With Wings Like Eagles:  A History of the Battle of Britain
Author: Michael Korda
Publisher: Harper

As 2015 is the 75th anniversary of the Battle of Britain, I decided to read a few of the newer books on the topic. The first on the nightstand was Michael Korda's entry from 2009. This is a breezy 322 page book which focuses more on the political background and tactics of the battle than individual aircrews. Korda is clearly a huge fan of Air Chief Marshal Sir Hugh Dowding and much of the narrative is discusses his decisions, leadership, and conflicts with other RAF members. It is interesting to learn that while Prime Ministers Baldwin and Chamberlain are often considered as appeasers, much of the technology of the Battle...Hurricanes, Spitfires, and radar...were funded under their watch. As expected, Nazi incompetence and ignorance was a huge part of why the Luftwaffe could never wipe out the RAF, but it was interesting to read just how incompetent they actually were. (For example, German intelligence made no effort to conduct any human intelligence with regard to Fighter Command air stations.) Sadly, Korda makes a few bloopers when it comes to aviation, both in the photo section and on the dust jacket: a flight of Bf-109s are identified as Bf-110s, Keith Park is pictured in a Harvard, not his personal Hurricane as the author suggests, a photo of a Hurricane and Spitfire was not taken during the Battle, no matter what the caption says, and the Hurricane was not an all metal fighter as identified on the dust jacket. While not an in-depth study of the aircraft or aircrew that fought on the front lines, this is a good introduction to the Battle and the behind the scenes politics on both sides of the channel.
on June 07, 2015
Email ThisBlogThis!Share to TwitterShare to FacebookShare to Pinterest
Labels: Book Review