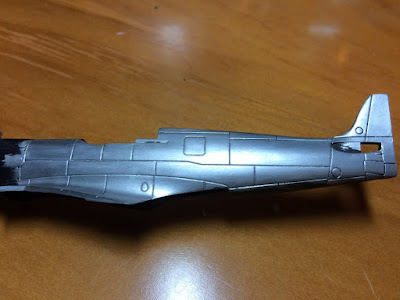 Earlier this year, I mentioned that I wanted to give AK Interactive's True Metal paste a try. I was able to get a tube of the aluminum a few months back and broke it out recently. The testbed was an Airfix Spitfire that had been sprayed with Mr. Finishing Surfacer 1500 Black. I did not polish the primer. Once it had been given time to dry, I applied a bit of paste with a Q-tip. A little goes a long way and I probably overdid it. I gave it 24 hours to dry and then polished it up a little with another Q-Tip. After another 24 hours, I tested durability. Masking with Tamiya tape caused almost no pigment lifting, but the paste must have not fully dried, as it still marked with a fingerprint. However, after a few more days drying time, the paste has cured and it is now immune from fingerprints, though some of the silver does rub off on my finger. (I will need to see if a Future overcoat effects the shine.) My finish is not perfect and I think that I will be more sparing with the paste next time. I do like the patina that is created with the paste and while not the silver bullet for natural metal finishes, this is an interesting product that would help create a very weathered natural metal finish. It also offers the added benefit of being able to apply it by brush or Q-tip so no airbrushes need to be harmed. The AK tube was quite expensive, but as so little is used, it may be a lifetime supply. 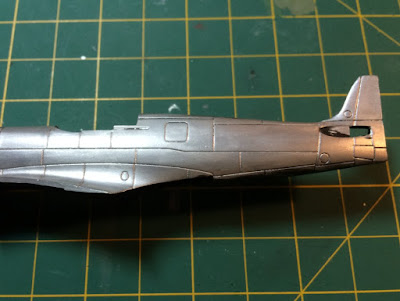 As a test, I also dug out my Rub 'n Buff silver leaf tube as a test sample. It is interesting to compare the smells of the two tubes, clearly they are not the same formulation. (The AK tube has a slightly stronger smell, but the Rub 'n Buff has more of a solvent smell.) I was able to get a slightly thinner coat of the Rub 'n Buff on the other side of the fuselage.  The Rub 'n Buff has less of a patina than the True Metal and is more uniform in shade.  I did not feel that it buffed up as much as the AK product.  It also held up to the tape test, and took quite a few days to fully cure, but like True Metal, it now seem impervious to fingers.  It is interesting that metal paste has made a reappearance in the modeling community and I'm excited to give both products a try on a real project sometime in the future.
on June 23, 2015
Email ThisBlogThis!Share to TwitterShare to FacebookShare to Pinterest
Labels: Modeling