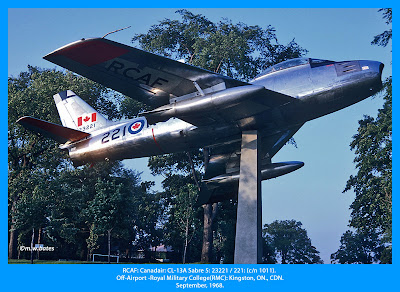 Now painted in camouflage, here is a nice photo my Dad took of the Royal Military College Sabre 5 23221 in 1968 at Kingston, Ontario.

Modeler's Note: There have been many 1/72 scale Sabres, but the best way to a Canadair Sabre 5 is the recently issued Airfix kit.  It isn't perfect...the wing fences are in the wrong place, some of the fuselage scribing is wrong, and the wheels are pretty bad...but it is a nice build, has accurate shapes and is very reasonably priced.  Oddly, many online love the Fujimi kit, but its fuselage is fat and bloated, not to mention the speed brakes are square.  The Hobbycraft/ Academy kit is "derived" from the Fujimi kit and suffers the same deficiencies.
on August 13, 2013
Email ThisBlogThis!Share to TwitterShare to FacebookShare to Pinterest
Labels: RCAF History, Sabre