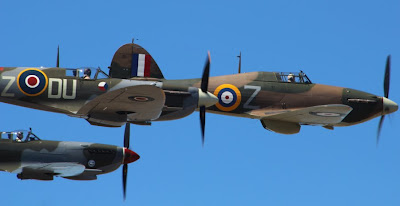 A couple of weeks ago (Saturday August 25, 2012 to be precise), I attended the Flying Heritage Collection Battle of Britain Fly Day.  The photos can be found here.  (Sorry, I'm too lazy to upload them to the blog.)  Aircraft participating included ex-RCAF Hurricane XIIa BW881/N54FH painted as Hurricane XII 5429/L of 135 "Bulldog" Squadron RCAF, Spitfire Vc AR614/N614VC in wartime RAF Czech Squadron markings, and Spitfire IXe SL633/N633VS in post war Czech Air Force markings.  (A historical side note:  Spitfire AR614 also has a Canadian connection.  It was imported to Canada in the early 1960s by Lynn Garrison for the Air Museum of Canada.  It later moved on to Don Campbell of Kapuskasing, Ontario and was registered as C-FDUY, before returning to the UK for restoration in the early 1990s.)  The two interlopers are a Paine Field firetruck and a Japanese Airlines Boeing 787 Dreamliner (JA828J) on a shakedown flight.
on September 07, 2012
Email ThisBlogThis!Share to TwitterShare to FacebookShare to Pinterest
Labels: Airshow, Flying Heritage Collection, Hurricane, RCAF History, Spitfire

AR-614 was imported to Calgary, Alberta, by Lynn Garrison in 1963 before he incorporated the Air Museum of Canada, in April, 1964. It was purchased, in the UK, by his agent Tony Lansdowne, and ex-RCAF pilot. Garrison retained title and somehow, while he was out of the country, the aircraft was illegally transferred to Don Campbell in Ontario.