How to Build Tamiya's 1:32 Spitfire 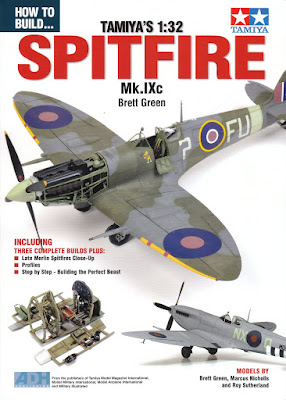 As I have mentioned before I'm a sucker for both modeling books and Spitfires books. So much of a sucker I bought a book on a model I'll probably never own or build...

Brett Green's entry in the How to Build series is a timely volume on the newer Tamiya Spitfire. Much hyperbole has been lavished on the big Spit, but it appears that it is justified. The book features three builds, an out of the box build of the Spitfire in RAAF markings by Brett, a desert bird by Marcus Nicholls, and a Spitfire HF Mk. VII conversion by Roy Sutherland. As is usual with Mr. Green's articles it is clear, concise, and has some useful tips. Mr. Nicholls's desert Spitfire is more an exercise in painting. One odd thing about his build, is he twice alludes to problems with fitting the cowling over the engine, but he never states what his problems were. Finally we have Mr. Sutherland's conversion. I found this the most interesting of the three articles and it certainly is a stunning finished model. However, Roy mentions a couple times that he used custom mixed Tamiya colours on his model, I just wish he had listed out the mixes so the modeler could attempt to replicate them. You gotta love the Medium Sea Grey over PRU Blue scheme.

In addition to the builds, there is a short page on the Pacific Coast Models 1/32 short run Spitfire, some profiles by Richard J Caruana, and a short walk around section on the two Spitfires at the Temora Aviation Museum.

I enjoyed the book, but I like Spitfires. Of course the real question is as a 1/72 scale modeler why did I buy this book? Well as I said I like Spitfires, but I think subconsciously I knew that I'd never finish the Tamiya kit if I bought one. So in order to avoid buying it and seeing it reside in the closet of no hope for an eternity, I bought this book, enjoyed some other modelers' builds, and now I can focus on finishing my 1/72 Airfix Spitfires.
on July 22, 2010
Email ThisBlogThis!Share to TwitterShare to FacebookShare to Pinterest
Labels: Book Review, Spitfire