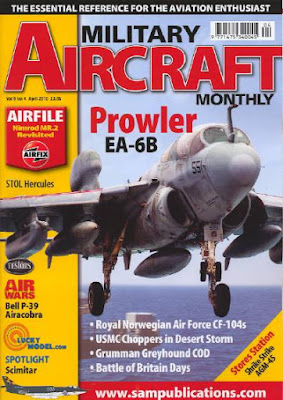 A few months back rumors started that the former Model Aircraft Monthly...now renamed Military Aircraft Monthly...was going to drop all model content and become just another aircraft magazine. Turns out the rumors are true. Not only that, but because of these changes, Neil Robinson has stepped down as editor to be replaced by SAMI editor Gary Hatcher. Personally I'm sadden by this shift of focus. MAM was by far my favorite modeling magazine because it contained a nice mix of modeling and history, generally with a British focus. Since the name change, I've noticed more and more modern U.S. subjects creep into the magazine. I guess the SAM Publications owners think boring gray jets is what American readers want...

So what about the magazine itself? While the April issue was the first under Gary Hatcher and first with no modeling. Things got off to a rocky start on the cover where it advertises an article on Battle of Britain Days. Oops, no Battle of Britain Days in this issue. Then things really stumble in the Russian P-39 article where a picture of the Commemorative Air Force P-39 is captioned as "P-39 42-19597 before ferrying from Alaska." Well no, that is just a modern airshow ramp, but it does cast doubt on the veracity of the article. In addition, the Testors paint charts include a listing of German colours in the P-39 article. On a Russian P-39? Come on. Also on the minus side we get all kinds short useless articles on modern US military subjects like the Shrike missile, a photo gallery of Desert Storm helos, the Grumman's Greyhound, the EA-6B Prowler, and the Credible Sport Herc.

Not all is terrible though, there is a nice Nimrod update, outside of the photo gaff the P-39 article is quite interesting, though in my opinion it should have had more about the Alaska-Siberia Route delivery of the Cobras, and there is a good Norwegian Starfighter article by Nils Mathisrud. All of these articles have something in common, they aren't on modern U.S. military subjects and they aren't two or three pages long. Hum, imagine that...more in-depth articles are of more interest. To round out the issue, there is a gallery by Tony O'Toole on the Supermarine Scimitar with some colour profiles, a short recap of the Target Falklands Day at the Yorkshire Air Museum, and a personal view of some of the 1950s RAF "At Home Days." Books and Letters wrap up the issue.

What is really odd is that even though they are trying to excise all modeling from the magazine, almost every advertiser is for modeling products. Wonder how long that will last? They even include a few throwbacks... colour listings tied to Testors paints in the P-39 article and a short modeling section in the Nimrod article, which was sponsored by Airfix. I wonder if MAM will notice an end to such sponsorships and advertisements now that they have abandoned modeling in the magazine?

Overall I get the feeling SAM Publications has no idea where they are going with Military Aircraft Monthly and they are trying to pander to modern U.S. aircraft fans. Unfortunately, I think with the prices and distribution of the magazine in the U.S. this will be nothing short of an unmitigated disaster. I guess to look on the bright side, there is now one less magazine I need to buy.

P.S.: While things were uneven in the April issue, May looks terrible. F-16s left right and center...three articles. Great! The most boring of the gray boring jets. Can it get worse?
on April 26, 2010
Email ThisBlogThis!Share to TwitterShare to FacebookShare to Pinterest
Labels: Magazine Review

Nice review, Jim! I too will no longer buy Military Aircraft Monthly (unless they do an a Caniff nose art article!)

So sad. I apprecaite the peek inside the "new" MAM. Guess I won't be buying it anymore. Shame since, like you, it was my favorite modeling magazine.