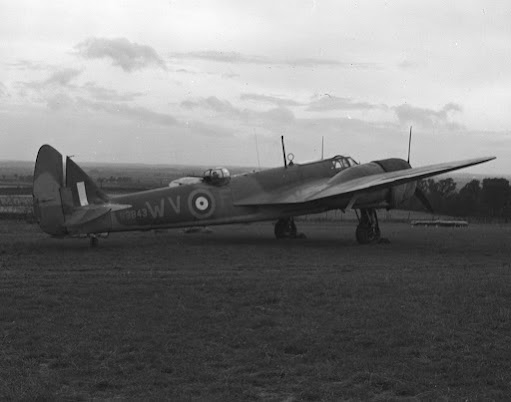 On August 9, 1941, RAF ace Wing Commander Douglas Bader's Spitfire Mk.Va serial number W3185 coded "D-B" was fatally wounded and Bader had no choice but to bail out.  The ace was able to escape from his Spitfire, but one of his prosthetic legs was left behind in the aircraft. 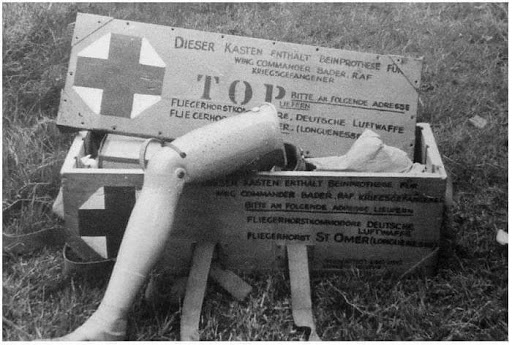 German General Adolf Galland notified the RAF of Bader's missing right prosthetic leg and permission was granted to drop a care package to Bader.  "Operation Leg" was born with the RAF planning to drop a box by parachute on a Luftwaffe base at St. Omer.  As part of a bombing mission to Béthune, France, on August 19, 1941, 18 Squadron Blenheim R3843/WV-F flown by Flight Sergeant John Murray (Jack) Nickleson (R/69892) of Toronto, Canada, diverted to St Omar and dropped the box addressed to the now prisoner of war.
Rumor has it that upon receipt of the leg, Bader immediately tried to escape.  (As with much of this story, it sounds like something one wouldn't believe if featured in a fictional war movie.)
Unfortunately, Jack Nickleson did not survive the year, being lost on September 20, 1941, when his Blenheim, again R3843, was shot down by anti-aircraft fire off the coast of Holland.  Sadly, all on board were lost.
(Photo courtesy of the Royal Canadian Air Force, Negative No. PL4542.)
Modeler's Note: The best way to build a Blenheim Mk. IV in 1/72 is the newish Airfix kit.  There is a much older Airfix kit from 1968 and one from MPM, but even though the new kit has a few issues, I'd go new Airfix every time.  And the nice thing is it appears R3843 does not have the blister windows fitted to many Blenheims, so you can build it out of the box.
Posted by AScaleCanadian at 7:16 PM
Labels: RCAF History, Tidbits of Aviation Esoterica

What an interesting tail. It sometimes boggles the mind the countless bits of history that are covered over in the telling of the "Official War Histories".