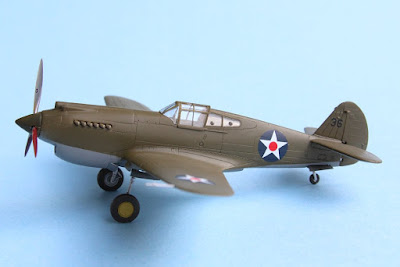 I started the Airfix 1/72 Hawk 81A-2 about the time it hit the U.S. shores (December 2012!!), planning to build an RCAF Tomahawk. I had it all together by mid-month... and then it sat... and sat. AMS got the better of me and I couldn't decide which RCAF Tomahawk to build. (Or so I deluded myself into thinking...)

In July 1941, the 33 Pursit Squadron loaded its P-40Cs on the USS Wasp (CV-7) for delivery to Iceland. Even though the U.S. had yet to enter the war, they had agreed to provide fighter cover for Iceland to allow the RAF fighter squadron on duty to return to England. The U.S. had important weather stations on the island and were concerned that the country would fall into Nazi hands and be used as a stepping stone to invade North America. On August 6, the P-40s were flown off the deck of the Wasp and landed at Kaldadarnes Airfield, near Reykjavík. On the morning of August 14, 1942, a Northrop N-3PB Nomad of No. 330 Squadron (Norwegian) located a German Focke-Wulf Fw-200 Condor maritime patrol bomber which was conducting overflights of Iceland. What happened next is the source of some confusion; either Lieutenant Joseph Shaffer, flying a P-40C, shot down the Condor or shared in the kill with two P-38s of 27th Fighter Squadron. (I'm sure the story depends on which Squadron is asked!)  Oddly, in some accounts, Lt. Shaffer is flying a P-39. (Lt. Shaffer did shoot down a JU-88 while flying a P-39 out of Iceland on October 14, 1942.) Sadly, I could find no record of which P-40C Lt. Schaffer was flying on August 14, 1942, so this P-40C became my subject: 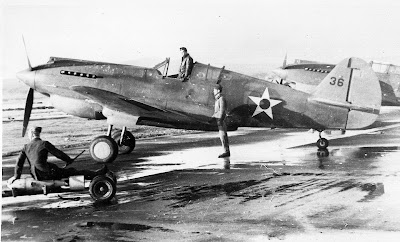 The kit has few vices. Sure, the wing to fuselage joint needed a little filler. Sure, the wing guns are liable to be knocked off. Most of the panel lines are fine for my purposes, but even I have to admit that the lines on the vertical fin are too heavy. Sadly, the canopy is too high, but I didn't replace it this time. (I didn't notice this until I was compiling this post, but it appears Airfix got the landing gear struts too long on the kit. Compare the sit of the prototype with the photos of my model. Looking at other Tomahawk shots, I think the collars that are below the landing gear doors on my model, should end in line with the doors. Next time I build this kit, I'll shorten the struts a little.) Overall, I enjoyed building it and it makes a nice model. 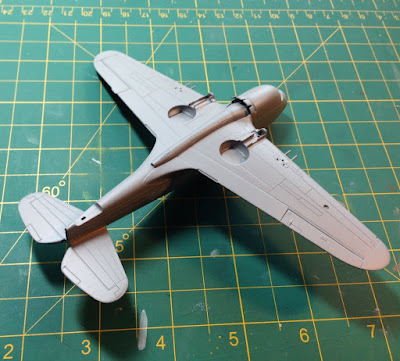 Paint is Tamiya Neutral Grey spray can for the lower surfaces and Mr. Color Olive Drab on top. Notice I even got the Maroon on the back of the prop! Decals are mostly Xtradecal but the 36 on the tail is from TwoBobs and the prop logos came from the kit. The final coat is from a Testors Acryl jar marked flat but it is more of a semi-gloss. 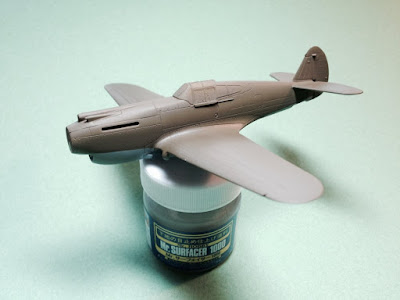 I ran out of time to replace the gun barrels and to weather it, but I'm reasonably happy with the final product. It is certainly an improvement over the Blitz Spitfire. (I do, however, need to read up on model photography.  Sorry the depth of field is lacking.) Even a dyed -n-the-wool RCAF fan has to admit this is a really attractive scheme and it suits the Tomahawk! 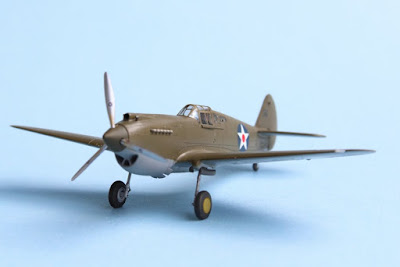 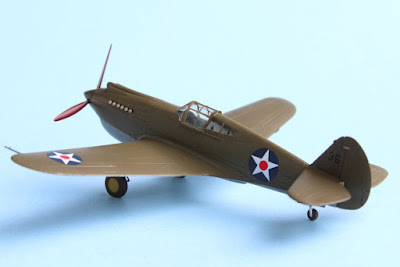 On Thursday night, the model was ensconced in the Northwest Scale Modelers's display case at the Museum of Flight for the "Battle of the Atlantic" display. Thanks to the display producers for allowing me to include my model and thanks to club member Don Conrad for the photos of the display. 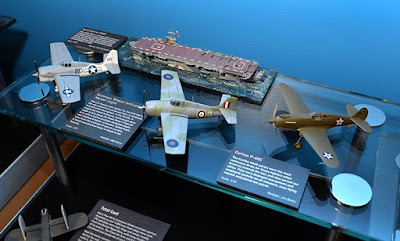 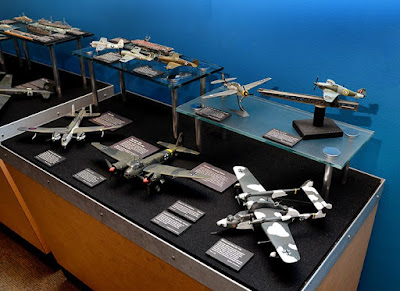 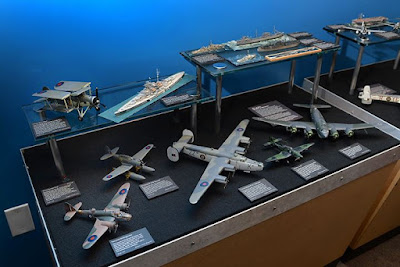