The Avro Arrow Strikes Back 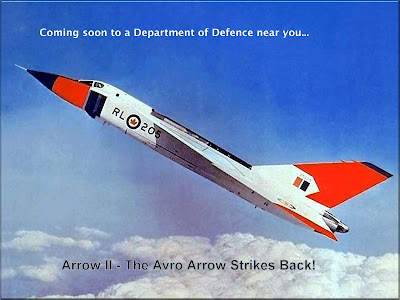 When I first read this story yesterday, I had only one though.  How had I slept through almost a whole year; because the only possible explanation is that it is April 1, 2013, right?  Guess not. Some think this is a viable option.  (Here is another story with some nice F-35 v. Arrow graphics. It must be true, a little chart in the newspaper said so!)

But I do have that old tool Hobbycraft Arrow lying around.  Hum...
on September 10, 2012
Email ThisBlogThis!Share to TwitterShare to FacebookShare to Pinterest
Labels: Avro Arrow, Insanity, RCAF