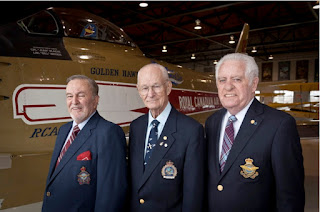 The following was passed along by Hawk One pilot Dan Dempsey. Also note that Hawk One has lost its Centennial of Flight tail markings and gained a Red Ensign and GH!


(OTTAWA-GATINEAU)  Vintage Wings of Canada re-dedicated its Discovery Air Hawk One F-86 Sabre on April 26 in honour of LCol (Ret’d) Fern Villeneuve, the first leader of the RCAF Golden Hawks and a member of Canada’s Aviation Hall of Fame, during a special ceremony at its hangar in Ottawa-Gatineau. At 84, Villeneuve is one of Canada’s oldest active pilots and still flies his own private aircraft.

The re-dedication was in keeping with Vintage Wings’ “In His Name” program designed to recognize Canadians who have made a special contribution to Canada’s aviation heritage. To also recognize the contribution of technical and support staff to the success of the Golden Hawks, two former long serving members of the RCAF were also honoured by being named “Honorary Crew Chiefs” of Hawk One. MWO (Ret’d) Bill Briggs served for five years as an aero-engine technician on the team and Cpl (Ret’d) Johnny Blache was the graphic designer who designed the original Golden Hawk paint scheme to celebrate the 50th anniversary of powered flight in Canada in 1959. The names of all three gentlemen now adorn the fuselage of Hawk One.

The surprise announcement was made by Mr. Didier Toussaint representing title sponsor Discovery Air, accompanied by LGen André Deschamps, Commander of the RCAF, and Hawk One team leader, LCol (Ret’d) Dan Dempsey. The overwhelmingly popular proclamation yielded a standing ovation from some 200 dinner guests celebrating the launch of the 2012 airshow season in Canada.

For the past two years the F-86 Sabre had been dedicated to the memory of the late Al Lilly, a former member of the RCMP and later a Canadair test pilot who became the first pilot to fly supersonic in Canadian airspace on August 8, 1950, when he took the prototype Canadair Sabre through Mach 1 in a vertical dive. 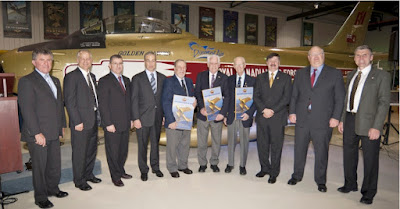 on May 05, 2012
Email ThisBlogThis!Share to TwitterShare to FacebookShare to Pinterest
Labels: Hawk One, RCAF History