It often seems forgotten that besides Hurricanes and Harvards, Canadian Car and Foundary built over 800 SB2C Helldivers under license as the SBW Helldiver.  Oddly, it was the only major wartime aviation project in which the RCAF did not fly the type.  All of the SBWs went to the US and the Royal Navy's Fleet Air Arm.  Here are a bunch of photos of Helldivers being built by CCF in Thunder Bay, Ontario. (Photos courtesy of the National Film Board of Canada/Library and Archives Canada.) 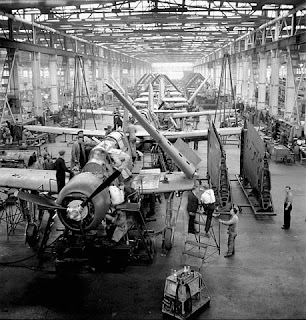 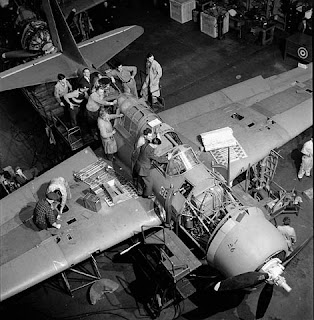 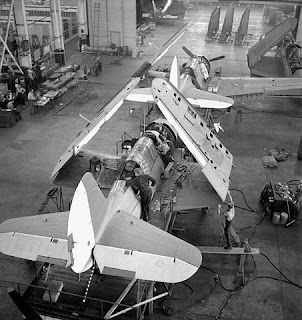 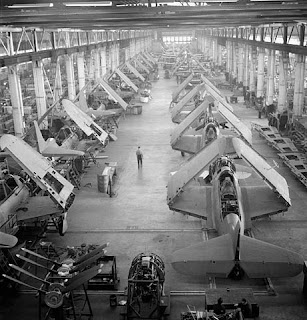 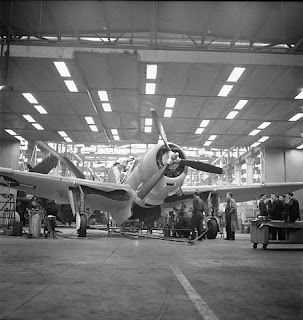 Modeler's Note: There are currently four Helldiver kits on general release. The old Airfix kit has been ressiued within the last few years and it is a product of its times with rivets and sparse detail. The Academy kit is excellent and has been the standard-bearer for years.  Cyberhobby has just released a new Helldiver which looks well detailed and has folding wings, but is unbelievably expensive for a 1/72 scale kit.  The Matchbox kit, now found in a Revell Germany box, just can't compete with the newer kits but can be helpful to convert the Academy SB2C into a SBW-1 or FAA SBW-1B.
on April 30, 2012
Email ThisBlogThis!Share to TwitterShare to FacebookShare to Pinterest
Labels: Canadian Aviation Industry

Thank you for posting these photos of CC&F Helldivers.
it's one of those aircraft that most people hated , but I loved.
I'm also interested in US type under manufacture and use outside of the USA. (especially Commonwealth countries and the Soviet Union)
Paul Flint
USA