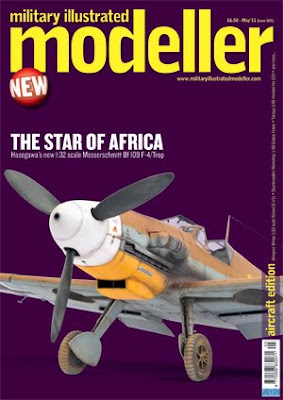 So I see on Hyperscale the other day that another new UK based modeling magazine will soon enter the market. I gotta say that I thought the market was saturated a few years ago and since then there have been at least two or three new entires. How can they all stay afloat? Wasn't the internet supposed to kill the paper magazine, not cause them to breed like bunnies?

Anyway, this new magazine is Military Illustrated Modeller and will alternate between aircraft issues and armor issues. (Neat idea.) It will be edited by Brett Green and Marcus Nicholls and looks to be courting the high end of the market both with production values and content. (It kind of reminds me of the nice, but pricey, Air magazine.) They are certainly catering to a different market then the new Airfix magazine! What I don't get, is outside of it alternating aircraft and armor, how is it much different from the publishing house's current Model Aircraft International magazine? What new does it bring to the table?

The first issue...an aircraft edition...will have a MiG-21 build and I'm a fan of Brett Green's work so I'll probably pick it up and report back.
on April 06, 2011
Email ThisBlogThis!Share to TwitterShare to FacebookShare to Pinterest
Labels: Magazine Review