70th Anniversay of the Battle of Britain - The Canadians 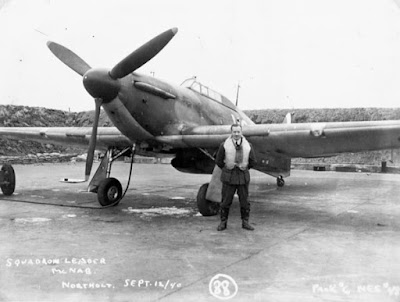 I missed posting this on Battle of Britain Day in September, but in honor of the 70th Anniversary of the Battle of Britain, here is an example of the Canadian contribution. While many Canadians flew in the Battle in RAF squadrons, only 1 RCAF Squadron flew combat during the Battle of Britain. 1 Squadron RCAF arrived in England in June 1940 and were reequipped with RAF Hurricanes to replace their old RCAF fabric wing Hurricanes they brought with them. During the Battle they claimed over 30 aircraft destroyed with CO Squadron Leader Ernie McNab leading the way with 4 1/3 kills. Here is S/L McNab with a 1 Squadron Hurricane I at Northolt, England on September 12, 1940. (Photo courtesy of the Canada Department of National Defence/Library and Archives of Canada.)

Modeler's Note: There are really only two choices for a Battle of Britain Hurricane I in 1/72. You can either build the old, but recently reissued, Airfix kit or the new Hasegawa kit. The Airfix kit captures the spirit of the Hurricane well, but doesn't have much in the way of detail. The newer Hasegawa kit has more detail, some of it poor like the cockpit, but has exceedingly exaggerated fabric rear fuselage detail and is really expensive, if you can find it.
on November 16, 2010
Email ThisBlogThis!Share to TwitterShare to FacebookShare to Pinterest
Labels: Hurricane, RCAF History

Good photo. A BoB RCAF Hurricane would make a great model. Does anyone make the decals?