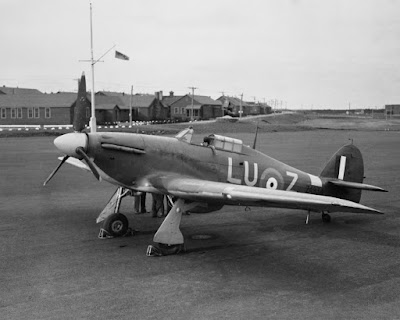 Anyway, these Hurricanes were part of the Merchant Ship Fighting Unit and often seen in Canada. In fact, it appears that 118 (F) Squadron at Dartmouth, Nova Scotia, was responsible for assembly and testing of the aircraft. They were certainly oft flown by RCAF pilots. The photo below is of Hurricane I Z4934 captioned as belonging to 1 Coastal Artillery Co-Operation Detachment, RCAF. This Hurricane was not on RCAF strength and while 1 CAC Detachment based out of St. John's operated Lysanders with the squadron code LU, I assume that someone just incorrectly captioned the photo, assuming it was with 1 CAC based upon the LU codes. The Hurricane was actually part of the MSFU. Note the segmented tail band for the serial and the later Hurricane II propeller and spinner. (Photo courtesy of the Canada Department of National Defence/Library and Archives of Canada with thanks to Steve Sauvé.)
on December 16, 2009
Email ThisBlogThis!Share to TwitterShare to FacebookShare to Pinterest
Labels: Hurricane