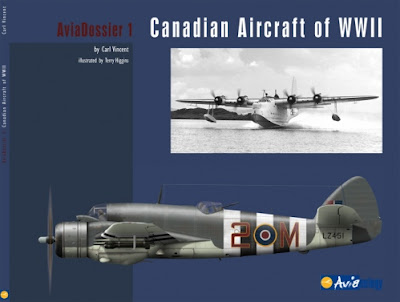 This large format softcover book is the first in a new series on Canadian aircraft written by noted Canadian aircraft researcher Carl Vincent. In the 1970s and 1980s, Mr. Vincent published books on the Blackburn Shark and the Liberator and B-17 in RCAF service, and served as editor of High Flight magazine. (A complete set of High Flight magazines and a copy of the B-24/B-17 book are among the most treasured items in my library.) Sadly, he has not published much work in the last couple of decades, but thankfully he is back with this book, and it is a stunner.

In general RCAF aircraft get given the short shift in most books and articles, and Home War Establishment get even less coverage. This AviaDossier attempts address this oversight with short chapters on 19 types operated by the RCAF, both in Canada and in Europe. Types include the expected Hurricanes, Beaufighters, and Spitfires, but also lesser known types such as the Fleet Fort, Bolingbroke IVW, and Northrop Delta. Each chapter includes a short history on the type, at least two photos, many never before published, and beautiful profile drawings by Terry Higgins.

My favorite chapter may be that on the Kittyhawk IV. As I have stated before in these pages, one of my RCAF holy grail searches was for photos of camouflaged Kittyhawk IVs. And here is one. In Olive Drab over Neutral Grey, it served with 132 (F) Squadron in British Columbia. I have an Academy P-40N sitting on my desk which will shortly be built as this aircraft. In fact modeling inspiration abounds in this book. A black and yellow target tug Shark? A Lockheed Hudson without a turret? Stocky Edwards's captured FW-190? I was also drawn in by the civil registered Fox Moth operated by the RCAF in Newfoundland. Wonder if anyone does a Fox Moth in 1/72?

This is a great book and it was worth the wait. Highly recommended to all RCAF fans and modellers!
on November 04, 2009
Email ThisBlogThis!Share to TwitterShare to FacebookShare to Pinterest
Labels: Book Review, RCAF History