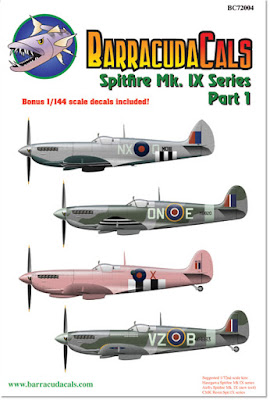 BarracudaCals is the new decal venture from Roy Sutherland. Being Roy is both Canadian and a Spitfire fan, it is no surprise to see a RCAF Spitfire among his first releases. Sheet BC72004 is titled Spitfire Mk. IX Series Part 1, which is a little misleading as two of the options are for Spitfire Mk. VIIs... Options include HF.VII in the attractive High Altitude Fighter Scheme of Medium Sea Grey over PRU Blue, a Operation Starkey HF.VII, a pretty in PRU Pink Spitfire IX, and Spitfire MH883 as flown by Buzz Beurling with 412 Squadron RCAF. VZ-B has been issued at least once before by IPMS/Canada, but this is the only currently available sheet in 1/72. The aircraft is in the standard Day Fighter Scheme and has 30 little swastikas on then nose. (If you wish to build Buzz's other RCAF Spitfire, Eagle Editions have issued his 403 Squadron Spitfire MA585 as sheet number 72114. This aircraft has 29 German crosses as kill markings.) The decals are nicely printed, and include a supplemental sheet as Roy was not happy with the roundel and fin flash colours on the main sheet. A full set of stencils is provided for one aircraft. The instructions are in colour and quite clear about decal placement. Each aircraft has a short historical description and includes the necessary information about which wheels, elevators, and intakes were used on the aircraft. Finally, as a bonus, 1/144 decals are included for each subject. Now if only we had a kit to put them on...come on Sweet...
on September 21, 2009
Email ThisBlogThis!Share to TwitterShare to FacebookShare to Pinterest
Labels: Decals

The title of the sheet is Spitfire IX SERIES, suggesting more than just Mk IXs. It should have been called Two-Stage Merlin Spitfires, but it would only serve to confuse some.