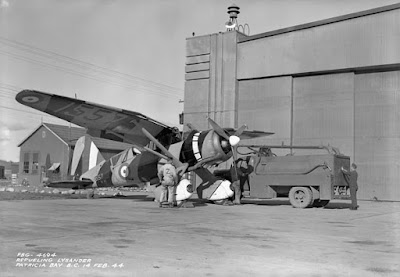 This is Lysander III RCAF #1557. This Lizzie was built by Westland in the UK as V9358, converted into a target tug, and operated by 3 OTU at Patricia Bay, B.C. Notice the natty white spinner, spats, and cowl flaps. Also notice the extended exhaust which was featured on many of the RCAF Lysanders. (Photo courtesy of the Canada Department of National Defence/Library and Archives of Canada.)

I have a Lysander III conversion planned in the near future using the Airfix kit, but I'm not sure I have the nerve to try the target tug scheme. Or for that matter the yellow/black serials under the wing and one the fuselage. Sure looks nice though. I also have a Matchbox Lysander II on the bench, but I'll save more details on that project for an bench update this weekend.
on August 14, 2009
Email ThisBlogThis!Share to TwitterShare to FacebookShare to Pinterest
Labels: Lysander, RCAF History