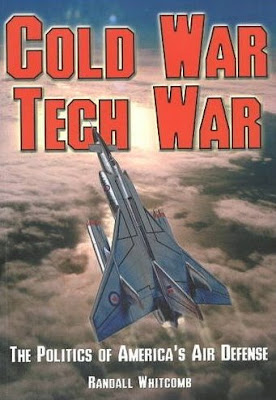 The Avro Arrow is almost a cottage industry in Canada. All these years later, new books are published on Avro Canada and on the Arrow almost every year. The Arrow also has the distinction of being one of the few aircraft that has had more plastic kits issued (three by Hobbycraft, one by Aurora, one by VP, and one by Astra) then aircraft that actually flew. The Arrow has been built up to mythic proportions and much general knowledge about the Arrow is complete fiction. (For example we all know the Arrow was killed by the USAF as they were concerned that that the RCAF would have a more advanced fighter...ok...well...whatever...)

The late Randall Whitcomb has attempted to take a slightly different approach in Cold War Tech War - The Politics of America's Air Defense by presenting the thesis that the U.S. and Canadian governments were in collusion to kill the Arrow so as to promote U.S. industry and U.S. military equipment at the expense of home grown Canadian products. (Yes I said thesis, Mr. Whitcomb presents the book as an almost academic paper with footnotes, dry prose, tables, and every other academic cliche.) As far as a thesis goes, I think it is well thought out and probably quite true. However, Mr. Whitcomb then spends most of the book veering all over the place to attempt to support his thesis. (I'm not sure how the British SST projects apply to the story, other then they were ideas presented by Avro engineers. Why all the aeronautical discussions in a book about global politics?) In the end the book becomes just another puff piece about how great an aircraft the Arrow was, and how advanced Avro Canada was. At one point he states that the Arrow would exceed the performance of all current aircraft, except maybe the F-22! In fact Mr. Whitcomb takes Avro's performance projects at face value, which at times is almost embarrassing; for example in the chapter on the Mach 3 VTO saucer project. (Also, Mr Whitcomb appears to have watched a little to much Star Wars claiming the Germans were working on lasers and beam weapons late in World War Two. Ok...)

The other major problem with the book, is quite honestly, some of it is hard to believe. Facts are wrong. For example Mr. Whitcomb states the Blackburn NA.39 never went into production...wrong, it became the Blackburn Buccaneer which served for many years with the Fleet Air Arm, and the RAF and was used in combat in the first Gulf War. He mentions Ken Follett's book Mirage...sorry the author was James Follett. And finally, he cites Wikipedia in the footnotes more then once. Really? Wikipedia? Wow. These are just a few of the mistakes I caught, so it calls into questions other "facts" he presents. In addition, the footnotes are odd. It is almost like he put them there to pretend to be academic. Some primary sources are cited, but others are just stated as facts with no cites at all. Finally, the CF-103 project isn't even mentioned in the book even though it got as far as the mockup stage.

This is not to say the book has no redeemable qualities. What Mr. Whitcomb lacks as a writer, he more then makes up for as a graphic artist. There are some stunning profiles and paintings of Avro Canada projects in the book. In addition, the Postscript should be read by every North American to understand just what is happening in today's world where economics and the economic elite drive all political decisions. Plus the book is kinda entertaining in an X-Files kinda way...just keep in mind isn't really non-fiction. More like semi-fiction. Don't believe all that you read!

P.S.: Please note that Mr. Whitcomb passed away before the book was published, so it may be a little harsh to criticize the book which was probably just a draft. Mr. Whitcomb might have edited it better and corrected some of the problems had he lived. But it was published as is and presented into the marketplace without the necessary editing and fact checking.
on August 25, 2009
Email ThisBlogThis!Share to TwitterShare to FacebookShare to Pinterest
Labels: Avro Arrow, Book Review