This Week in Canadian Aviation

It has been a good week for Canadian aviation fans. A few things of note:

1. The Canadian Forces got their leased Mi-8s to help transport supplies in Afghanistan. The lease will last a year until the CAF's new Chinooks are in service. I've always been a fan of Russian Cold War aircraft, so I'm glad to have a reason to add a Mi-8 to my Canadian collection. I hear the Hobby Boss Mi-8 is a really nice kit, so I look forward to building a replica of a Mi-8 leased by the CAF from Sky Link of Toronto. (Photo courtesy of the Canadian Department of National Defence.) 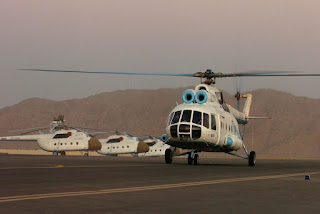 2. The first flight of the long awaited Sikorsky CH-148 Cyclone took place last Saturday in Florida. The Cyclone will replace the CH-124 Sea King which has been in service with the Canadian military since 1963. Sadly, it is unlikely that the Cyclone will enter CAF service until at least 2010.

3. The Hawk One Sabre C-GSBR arrived at Cold Lake, Alberta, yesterday for its Golden Hawks paint job. It was met on-route by AETE's colourful CF-188 188907. (Photos courtesy of the Canadian Department of National Defence/AETE.) 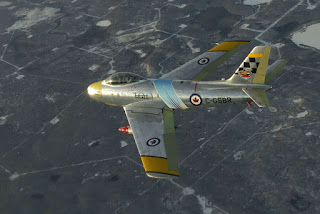 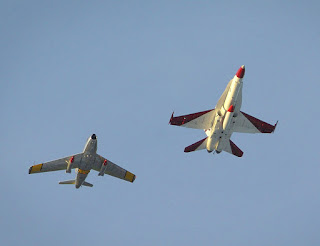 on November 21, 2008
Email ThisBlogThis!Share to TwitterShare to FacebookShare to Pinterest
Labels: Canadian Armed Forces, Centennial of Flight, Hawk One