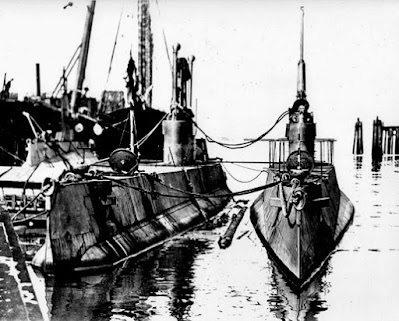 It appears that Das Werk has a hit on their hands with their soon to be released 1/72 U-9 U-Boat kit. If they are looking for ideas on a follow up, how about the HMCS CC-1 and CC-2, Canada's first two submarines?
The two Davids (DatGuy and Knights) are big fans of the Drachinifel YouTube channel. Yesterday, Mr. Knights suggested I check out their latest video on the Royal Canadian Navy which is humorusly subtitled "Sinking you, but politely." I enjoyed the video. While I was aware of the the RCN's Corvette story thanks to the 1/72 Matchbox kit (A kit I lusted after in my youth, but never got a chance to build); I was surprised by the story of Canada's first two submarines. Wow, how have I never heard this story before?
Ok, I take that back, they weren't bought by Canada, but the province of British Columbia. While the thought of a province with its own military service seems rather shocking, it does make some sense that the province, so remote from the Atlantic Ocean and Canada's capital in Ottawa, would want to defend its shores. The CC-1 and CC-2 submarines were not identical, but similar versions designed by the Electric Boat Company. The Electric Boat Company contracted with the government of Chile to build the two boats, but, after completion, the deal fell through. Subcontractor Seattle Construction and Drydock Company looked to offload the boats and the Premier of British Columbia stepped in to purchase the subs. The two subs left Seattle without permission on August 3, 1914 and made their way to British Columbia, with the USN in chase. Within days, the submarines were transferred to the Canadian government and joined the RCN, being renamed HMCS CC-1 and HMCS CC-2 on October 1914.
However, the RCN had a problem. World War One had broken out in Europe, and the subs were based Esquimalt, B.C., in the Pacific. After their refits in 1914, the two subs undertook patrols and training in the Pacific, but a decisions was made in 1917 to send the boats to the Atlantic. Leaving B.C. on July 21, 1917, the two subs had - in the best tradition of RCN second-hand submarines - multiple maintenance issues, failures, and problems, but the crews persevered and they were the first RCN warships to pass through the Panama Canal. Finally arriving in Halifax during October 1917, after many stops for repairs, the two subs were found to be in need of an overhaul. During their time in drydock, the subs survived the Halifax Explosion. But after all this work, expense, and time, the boats were used as training craft and never went on patrol in the Atlantic. 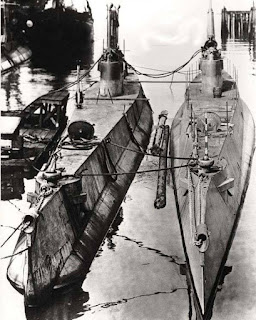 So yea, these things didn't do much to help the war effort, but hey, I'd buy one copy of a 1/72 CC-1 or CC-2. See Das Werk, a guaranteed seller!
(Photos are courtesy of the Department of National Defence/Library Archives Canada. I'm unclear if the photos were taken in Seattle or Halifax, or even one of each.)
on January 28, 2021
Email ThisBlogThis!Share to TwitterShare to FacebookShare to Pinterest
Labels: RCN History