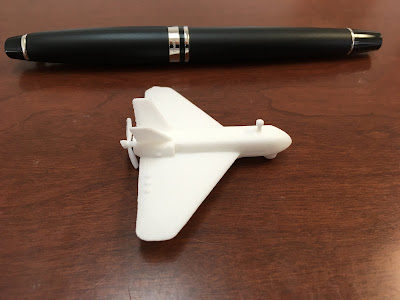 The SAGEM CU-161 Sperwer (Dutch for sparrowhawk) was a small UAV used by the RCAF in Afghanistan. Nicknamed the "flying ski-doo" based upon the resemblance of the sound of the engine to a snowmobile, they entered service with the RCAF in 2003, and were retired in 2009, after flying over 1,300 missions. As the CU-161 was the first Canadian Forces UAV to be used in combat, I wanted to add one to the collection. 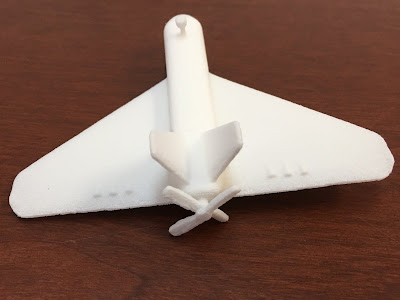 Knowing that no plastic or resin kit existed of the type, I was excited to find one listed on Shapeways.  Excitement was dulled upon receipt of the item.  The general shape and size looked good, but the print was poor and not up to the standard of previous pieces I'd ordered by Shapeways.  Ragged edges, and rough surfaces overwhelmed the part.  (Maybe I chose the wrong type of material to have the item printed in?)  I had no idea how to proceed. 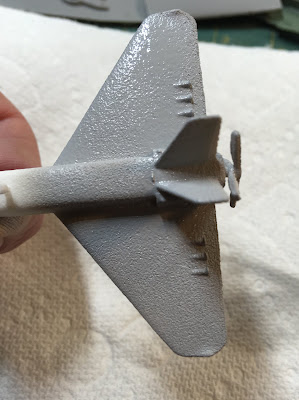 I tossed some Mr. Surfacer on the part, and it only looked worse. In the drawer it went.  Near the end of the year, Roy Sutherland posted about a 3D printed sci-fi figure that he was asked to paint for a friend.  His description of the print sort of sounded like my little Sperwer.  His solution was something like 10 coats of primer.  Sure worth a try.  Wish me luck!
on January 19, 2020
Email ThisBlogThis!Share to TwitterShare to FacebookShare to Pinterest
Labels: Modeling, RCAF History, UAV

I had the same experience using Shapeways parts for my build of the Akitsushima. Shapeways parts are marginal at best, and require a lot of work to get up to modeling standards. Way overpriced for what you get. The good news is the resin printer technology looks like it will work for what we do, Model Monkey has a shop on Shapeways but the stuff he prints himself using a resin printer is far superior.