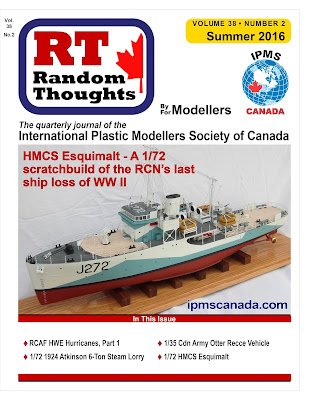 One of the reasons my modeling has been on hiatus for a few weeks was to fallow me additional time to finish the Hurricane project for IPMS Canada.  Like most research and writing projects, this one took longer than expected, so I'm very excited to announce that Part 1 of the RCAF Home War Establishment Hurricane project is included in the Summer 2016 issue of Random Thoughts (RT), which is currently at the printer. This is my humble attempt to correct some of the confusion and misconceptions floating around about RCAF's Hawker Hurricanes.  Part 1 features the UK built Hurricanes, the CCF Battle-Hurricanes and CCF Sea Hurricanes, including a little diversion into the MSFU story.  The article is illustrated with many previously unseen photos, which include such oddities as the RCAF's Airacobra, MSFU Hurricanes refinished in Canada with atypical roundels, and Hurricane 323, the only UK built "rag wing" Hurricane to serve with both the HWE in Canada and fire its guns in anger during the Battle of Britain. 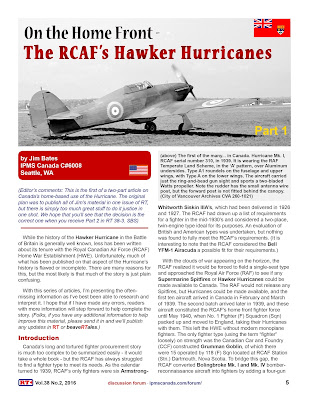 Now, I'll get busy finishing Part 2, which will feature the Hurricane XII and XIIA and a free decal sheet of HWE Hurricanes in 1/72 and 1/48.

RT, and the free decal sheet, are only available to IPMS Canada members, so please visit the link to join the Society.
on May 23, 2016
Email ThisBlogThis!Share to TwitterShare to FacebookShare to Pinterest
Labels: Hurricane, IPMS Canada