The Sea Hurricane in Canada 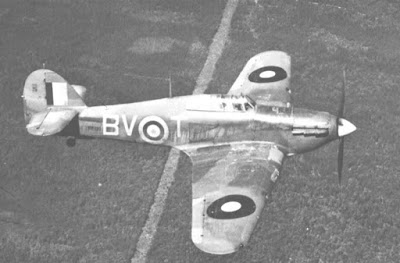 When World War Two dawned, the Royal Navy’s Fleet Air Arm found itself woefully short of fighter aircraft.  They started adapting land based types for carrier use: the Gladiator, Spitfire, and Hurricane were soon adapted into the Sea Gladiator, Seafire, and Sea Hurricane.  While the Sea Gladiator was outdated, the Sea Hurricane and Seafire soldiered on until U.S. types such as the Hellcat and Corsair were available in large numbers.  Of the two, the Sea Hurricane was probably the better carrier type, being less delicate than the Seafire.


While the Sea Hurricane never served in the Royal Canadian Navy, it was, ironically, operated by the Royal Canadian Air Force.  In late 1941, the RCAF found itself without any frontline fighters, having sent its earlier Hawker Hurricanes off to the UK along with 1 (F) Squadron RCAF, and was having a hard time procuring additional fighters to meet its needs.  For reasons that are still slightly unclear, the RCAF received 50 Sea Hurricanes in 1942.  It is assumed that these aircraft, built in Thunder Bay, Ontario by Canadian Car and Foundry, were to be used as part of the Fleet Air Arm Merchant Ship Fighting Unit (MSFU) based in Canada, but were diverted to the RCAF.  These Sea Hurricanes were basically a Hurricane Mark I with a tail-hook, catapult spools, a short blunt DeHavilland spinner, and an eight gun wing.  The Sea Hurricanes carried serials BW835 to BW884 and entered into RCAF service with hooks retained, ROYAL NAVY painted on the fuselage, and painted in the Fleet Air Arm scheme of Extra Dark Sea Grey and Dark Slate Grey over Sky.  Though photographic proof is scant, it appears that some aircraft had their tail-hooks removed during their RCAF service or that some of the aircraft were MSFU Hurricanes without tail hooks.  Most of the Sea Hurricanes spent their time flying out of Dartmouth, Nova Scotia on strength with 126 (F) Squadron.  (Oddly, 118 (F) Squadron was heavily involved with Sea Hurricanes at the time even though it was not a Hurricane squadron.  The unit flew both with RCAF Sea Hurricanes and MSFU aircraft and appears to have accepted many of the RCAF Sea Hurricanes from the manufacturer.)  In 1943, the Sea Hurricane survivors were returned to Canadian Car and Foundry and upgraded to Hurricane XIIa status.  This involved fitting US made Packard Merlin engines and the related fuselage extension, removal of the tail-hooks, and a repaint into the standard RCAF Hurricane scheme of Dark Earth and Dark Green over Sky.  After the return to service, most of these Hurricanes were allocated to 1 OTU in Bagotville, Quebec, for training purposes. 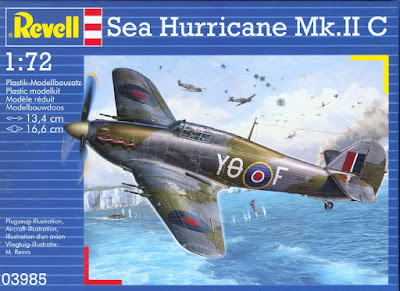 The first actual Sea Hurricane kit to be released in 1/72 scale was Revell’s Sea Hurricane IIC which appeared in 1999.  Not appropriate to build as an RCAF Sea Hurricane, this is the later cannon armed version flown by the Fleet Air Arm.  The kit has recently been reissued by Revell and makes into a neat model.  The breakdown of the kit parts is rather complicated, especially the wings that are made up of five separate pieces.  The fit is good, but it does take some care.  Revell provides the rear fuselage insert and tail took, but the modeler is left to make up the catapult spools if he or she wishes.  Cockpit detail is simple but effective with a decal instrument panel.  The clear parts may not be as clear as many would wish.  Sadly, the kit does have some accuracy concerns.  The doghouse area of the rear fuselage under the canopy is not depicted, the spinner and propeller are not prototypical, and the rear fuselage fabric detail is slightly heavy.  (The wings are also too large in chord.)  That being said, it does resemble the Sea Hurricane when finished and the price is right.

More recently, Airfix has issued a combined Hurricane IIC/Sea Hurricane kit.  Unlike the Revell kit, this is a conversion in a box.  The kit does provide the tail-hook and the fuselage insert, but the kit is molded as a Hurricane and the modeler is instructed to cut open the fuselage to fit the insert.  Again, the catapult spools are not provided.  The kit itself is a mixed bag; the fuselage fabric is beautifully done, but the recessed panel lines and rivets are very heavy.  The moldings are quick thick and detail is lacking.  However, it does build up reasonably well, and outside of the surgery necessary to build the Sea Hurricane, would make a good first effort for a beginner.  Sadly, again, there are accuracy issues.  The propeller is comically small, the spinner is, again, not prototypical and the canopy is larger in length than it should be which makes the whole fuselage look odd.  In addition, the horizontal stabilizers are too small and the elevators are the wrong shape.  Decals are provided for a mostly white Sea Hurricane from the HMS Nairana named “Nicki.”  Even with it being the newer kit, and again, at a nice price, I would still recommend the Revell kit over the Airfix Sea Hurricane if the modeler is looking for a 1/72 example for their shelf.
on June 30, 2015
Email ThisBlogThis!Share to TwitterShare to FacebookShare to Pinterest
Labels: Hurricane, RCAF History