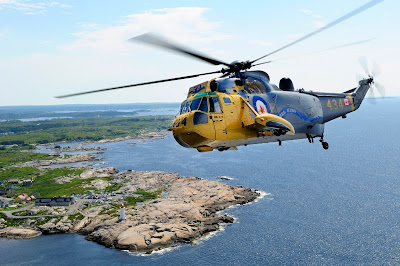 This weekend Sea King alumni are gathering in Halifax to celebrate 50 years of Sea King operations with the Royal Canadian Navy, CAF, and RCAF.  (It is hard to even comprehend that the Canadian military has been operating the CH-124 in front line service longer than I have been alive.)  As part of the anniversary the RCAF has painted CH-124B 12434, one of the troop transport conversions, in a "special" scheme.  (Photos courtesy of the Canadian Department of National Defence.) 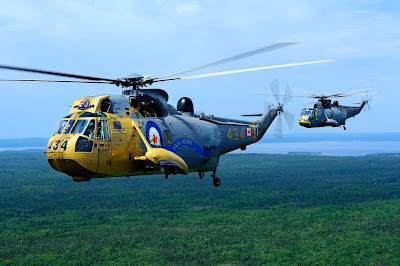 Modeler's Note: To the best of my knowledge there have been four 1/72 Sea Kings.  Revell's is probably the best, but it is a Westland version, Cyber Hobby's is the newest, Fujimi's is older but workable, and Airfix's is in need of retirement.  In all cases they will need modifications to build a Canadian Sea King.  Look for a review of the new Cyber Hobby kit in a forthcoming issue of the RCN News Magazine.
on August 03, 2013
Email ThisBlogThis!Share to TwitterShare to FacebookShare to Pinterest
Labels: RCAF, Sea King