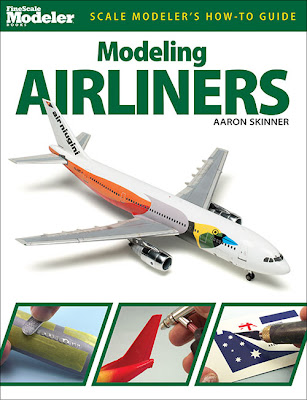 Airliners are something that I’ve always wanted to build, but for which I never really found the time , nor have I, shockingly, ever purchased any kits.  However, it appears to be the golden age of airline modeling with new kits being released every month, so I decided to order this book from Amazon and see what it had to offer.  (That, and I’m kind of addicted to modeling books.)  My order was not without some trepidation, as Mr. Skinner is a Fine Scale Modeler Editor and FSM has reached a level of simplicity to be almost useless.  Vapid articles with no detail and the most basic tips and techniques pummeled into the ground issue after issue.

However, I should not have been worried; this is a nice book.  It is an 80 page softcover book with colour throughout.  Chapters include construction, painting, decals, conversions, detailing, weathering, and of course a model gallery.  All the models are very well done, and each chapter is well illustrated.  What it does not do is skimp on words, and there are clear, but not overly simplified, descriptions of each step and technique.  Mr. Skinner’s technique to fill windows is both backwards of what I would have tried and quite genius.  Shockingly for 2013, there is even a vacuform build!  Everything you need to know to build airliners is here.  Sure, all the basics are covered, but there is enough meat here that even the experienced modeler will pick up a few tips and techniques.  Very well done.  Now to get a DC-8 and some Canadian Pacific decals...
on August 20, 2013
Email ThisBlogThis!Share to TwitterShare to FacebookShare to Pinterest
Labels: Book Review, Modeling

Good review. It deserves to be read by a wider audience.