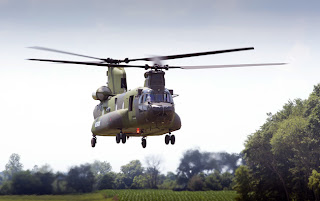 Today Boeing announced that Canada's first CH-147F Chinook successfully completed its first flight on June 24 in Pennsylvania.  The inaugural flight lasted more than 80 minutes and confirmed the initial airworthiness of the aircraft, including its new electrical system and cockpit.  It is expected that the first CH-147F will be delivered to the RCAF in 2013 and they will be based at CFB Petawawa.

Modeler's Note: My understanding is that the CH-147F is based on the MH-47 which Italeri and Revell have issued.  Both kits are the Italeri plastic and it appears that only the Italeri kit is currently available.  While not the most modern Chinook kit on the market, it still holds up very well and is arguably the best Chinook in 1/72.  Sadly, it suffers from Italeri's insane overpricing trend of the last few years.
on July 11, 2012
Email ThisBlogThis!Share to TwitterShare to FacebookShare to Pinterest
Labels: CH-147, RCAF

I am not sure about the currently available kits but the Cdn Chinook is more like a G model rather than the F model. It has the fat tanks and long nose not found on the standard F model.