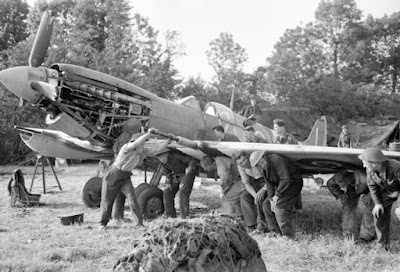 Men of an RAF Repair and Salvage Unit working on a damaged Supermarine Spitfire Mk IX of No 403 Squadron, Royal Canadian Air Force, at a forward airstrip in Normandy. © IWM (CL 186)
Ever since seeing the above photo as a young boy in a Spitfire In Action, I've been captivated by this image and wanted to model the scene. Maybe someday I'll even get to it.
Modeler's Note: The two best options for a Spitfire IX in 1/72 are the CMK resin kit or the new Airfix kit. They are a study in contrasts. Everything about the CMK kit is high end and complicated. High priced, resin and photo etched with a vacuform canopy, it covers all the options. Just beautiful. On the other hand the Airfix kit is simple with minimal detail. A great starter kit, it looks good out of the box, but really could use some additional detail in the cockpit and the wheel wells. There is a Hasegawa Spitfire IX that is nicely modeled, but the fuselage is much too short and quite honestly the cockpit detail isn't much better then Airfix's.
on February 09, 2012
Email ThisBlogThis!Share to TwitterShare to FacebookShare to Pinterest
Labels: RCAF History, Spitfire

Plus, of course, should something go wrong (heaven forfend!), one feels rather less foolish that it happened with the Airfix kit.