Destruction of a Dream 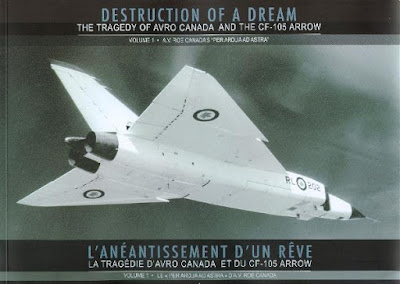 Avro Arrow books are a dime a dozen and because there are so many on the market, it is easy to sometimes miss a good one. Outside of the rather hyperbolic title, Destruction of a Dream is quite an interesting Arrow book. Published in bilingual English and French, this softcover book is really a scrapbook of Avro Canada and the Arrow. Volume One opens with the founding of National Steel Car and ends with the official name Arrow being bestowed on the CF-105.

Each section has a myriad of photos, brochures, and other Arrow collectibles. The left side of the page has the text in English, and the right side has the text in French. The text is short, but to the point. The first few sections deal with wartime and early post war projects. We have Lysanders, Ansons, and of course Lancasters. The first major postwar project for Avro was the Jetliner, and next section of the book illustrates the Jetliner program well with many colour and black and white photographs. Next we get into Orenda Engine with Sabres and the jet engined Lanc. Of course Canada's only indigenous fighter, the CF-100, is covered in detail along with the unbuilt swept wing CF-103. Again there are many interesting photographs, both in colour and in black and white. The CF-103 section is fascinating, with more photos of the CF-103 mock up and models then I have seen in the past. Of course the Avro flying saucers are included and only then do we get to the story of the Arrow. Most of the Arrow section in Volume One is dedicated to the specifications and testing. There are quite a few interesting wind tunnel models, the Nike boosted models, a few pages on the technology needed to manufacture the Arrow, and then finally the weapons of the Arrow. While this section of the book is dedicated to the weapons for the CF-105, it has some unique CF-100 photos, including Canucks fitted with Falcon missiles, Genie rockets, and some neat colour photos of the Sparrows missile program. (Dayglo Sparrows with little RCAF roundels on a CF-100 with large patches of dayglo would make an nice modeling project.) Finally, we wrap up with a section on the Iroquois engine and then the official naming of the CF-105 project as the Arrow.

What makes this book are the photographs and Valiquette has done a great job in sourcing unique photos. Rather then illustrate the CF-100 Sparrow program with the usual shots, he used the stunning colour photos. Even the Lancaster section has different photos, rather then the usual shots. I also found the period brochures and advertisements to be fascinating. I really enjoyed the book, and look forward to Volume 2.
on April 19, 2010
Email ThisBlogThis!Share to TwitterShare to FacebookShare to Pinterest
Labels: Avro Arrow, Book Review