David Geldmacher has decided to attempt to support my Revell Hunter build by doing on of his own. David is a huge reconnaissance fan, so he will be converting his Hunter into a FR.10. I'll let David take it from here.

Previously in the one month Hunter build:

The kit seat was assembled and a white metal aftermarket Martin Baker Mk.2 from A+V Models was cleaned up and primed. The cockpit interior had a large sinkhole on the port side ejection seat rail covered with a scrap of thin sheet plastic. The fuselage interior, cockpit tub, instrument panel, and both seats were sprayed in a very dark gray (scale black) 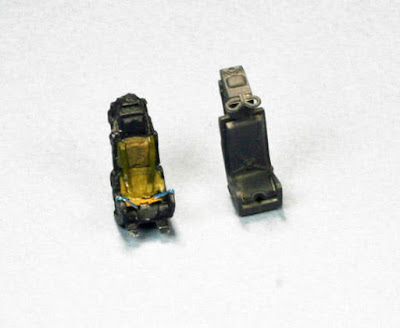 After looking at the painted pieces I chose the white metal version of the MB Mk.2. It is now done except for the lower ejection handle and the face curtain handles; I will wind the handles from fine yellow and black wire. The seat harness and leg straps are made from wine-bottle lead foil. Although the Revell seat is fine, an added harness would help give some depth to otherwise flat detail. The face curtain handles in the kit seat are a nice touch, but overscale. (photo). The A+V metal seat had better back cushion detail and adds easy nose weight, both of which influenced me to go that way. The Revell seat is certainly good enough to go to the spares box for that day in some distant post-apocalyptic period when I run out of white metal early British ejection seats and can't restock.

In addition to the kit's 100 gal drop tanks, a pair of 230 gal tanks was pilfered from an Airfix Hunter FGA.9. These were poorly cast with deep sink holes and had some retraction around the edges. Automotive putty filled the sink holes and Mr. Surfacer 500 was used all the way around the seam. The Airfix tanks lack the "trough" evident at the pylon attachment of the real thing, but only a Hunter expert with too much time on his hands would notice the difference in a 1/72 display-shelf model. The Revell kit tanks are fine. They await their fins, but otherwise I got a jump start on underwing stores for this compressed-time build.

Finally, the camera nose for the FR.10 must be addressed. There is a minimal addition of length, but the nose profile is altered by the addition of the forward facing camera. The Quickboost replacement piece is expedient, but inaccurate. It lacks the subtle profile change to accommodate the forward facing camera, and it inaccurately represents the location of the side facing cameras of the British photo-Hunter. Therefore, the kit nose was first sanded back to create a flat mating surface; this reduced the length by about 3-6 scale inches. The flat spot was painted black. then a piece of cylindrical clear sprue was cut ~9 scale inches long and cemented to the front of the nose (photo). I will fair this in with 2 part epoxy to create the subtly different nose profile of the FR.10. I have not yet decided how to handle the "eyelid" shutter that covered the forward facing camera when it was not active, but I will probably just sand the sprue the shape with the nose, scribe the horizontal shutter line and paint the new tip a brighter silver than the underside. 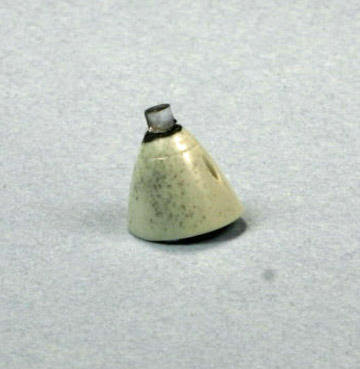 Fuselage closed, with a 1/8 oz. weight behind the cockpit. Not an easy fit to get the tub in place. I went with the instrument decals over the raised detail, using your recommendation of Future as setting agent. Things settled down reasonably well, so now there is color, fine detail, and texture on the panels.

I added the ejection handles, but I'm not real happy with the sit of the metal seat in the tub. It seems too low to me; I may go back to the kit seat. Plenty of time to decide that before adding the canopy.

Next steps will include finishing the inside of the intakes and the wings, as well as adding the Quickboost tail feathers.

Intake interiors and ramps brushed with aluminum and ramps glued in place. Wings constructed. I recommend adding the dogtooth leading edge before the tips, and using conventional cement rather than CA to allow for the necessary alignments. Very nice engineering.

I also worked on the kit seat. Face curtain handles were painted yellow and, when dry, given black stripes with a Gundam marker. Cushions were painted with various flavors of Citadel Miniatures browns. I also added a wine bottle foil upper back "cushion" to replicate my metal seat and photos.

The wings are now attached to the fuselage. No further progress to report.

Mr. Surfacer added to gaps at wingtip and dogtooth extensions, as well as around nose gear insert (probably not needed at the latter.