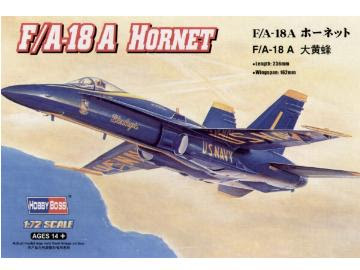 Over the last few months, there has been some discussion on the modeling boards about the forthcoming Hobby Boss Hornets. Would they be ez-build kits or "normal" kits? Once sprue shots began appearing, it was obvious they were ez-build kits. I for one was happy with that choice, as it would have been very difficult for Hobby Boss to top the new Academy F/A-18C kit and with all the CF-188 decals I have it would be nice to have an easy kit to throw together quickly to illustrate some of the schemes. So I ordered one from Lucky Model.

What came in the box? As stated above, these are ez-builds, but are not packaged like the World War Two fighters in the vacuform trays. These are in real boxes. One bag had the top fuselage piece complete with wings. This is a really nice piece of injection modeling with recessed panel lines and inserts to build either a single seat or dual seat Hornet. The fuselage bottom was in a separate bag. The two sprues with drop tanks and detail parts are in a third bag, with the fourth bag containing the tail sprues. Both F/A-18A and F/A-18C tails. The final bag contains the clear canopy.

The kit is clearly...influenced...by the Hasegawa kit. While the two fuselage parts are nicely molded, there is some flash on the detail spures. A quick dry fit shows things appear to fit ok. With so few parts this should be a pretty easy build.

Sadly, we have some major issues. First off the cockpit floor and stick are modeled in place with the top fuselage half and the stick is just that...a stick. There is a seat to insert. The instrument panel is a flat wall and the side consoles are too high. There is no detail in the wheel well, either. These aren't deal breakers to me. However, it gets worse, no tail hook, no little LEX fences, and no blade antennas. Oops, they got them on the box art, but missed them in the plastic. The nose gear is ok, but the mains are way too simplified. The CAF decal option is atrocious…the roundels are sick…sick…sick. I can’t speak about the accuracy of the Blue Angles option.

Overall, as much as I would love to have a simple Hornet kit that is easy to build, this isn’t it. I don’t mind simple cockpits or the lack of wheel well detail in 1/72, but come on, missing an arrest hook and the LEX fences? While the kit is pretty cheap from Lucky Models ($13), you can still find the Hasegawa kit at reasonable prices…sometimes under $10, and while that kit is a pig to build, the final product out of the box will be better then this Hobby Boss effort. Sadly, one to avoid.

P.S.: These kits have now made their way to the U.S. with a retail price of $24.99. Wow, that is ridiculous. Again, I will reiterate this kit probably isn't worth $13, so at $25 it is highway robbery. If you want a really good Hornet kit, buy the new Academy F/A-18C. If you want an ok, but cheap Hornet, find a budget boxing of the Hasegawa kit.
on May 15, 2008
Email ThisBlogThis!Share to TwitterShare to FacebookShare to Pinterest
Labels: Modeling