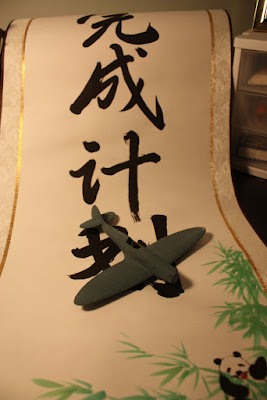 You may have seen David's many comments to finish the Spitfire. The 1/72 Airfix Spitfire XIX to be specific. I started the kit upon receiving it last year and all went ok until it came time to mask the canopy and paint. Sure the scheme is simple...overall PRU Blue...but I have a total fear of my airbrush. (In fact, as a small child whenever the lights were turned out I was always scared there was an airbrush hiding under my bed or in the closet.) Anyway...David went to China this summer and managed to acquire a special mystic scroll during his travels. He had the scroll blessed by a posse of Buddhist monks and sent it to me to motivate completion. (For you readers that are not Space Cowboys, please note that the scroll says "Finish the Spitfire" in Mandarin. "Ni ta ma de. Tianxia suoyoude ren. Dou gaisi." Oh...sorry Captain Mal...ok...I won't mislead my readers...it really means "Complete the Task," but that isn't nearly as good a story is it?) While I haven't got the Spit finished yet, I did manage to get a coat of paint on it. I used my new Grex single action brush for the first time, and for whatever reason the paint went on thick and grainy. (I'm sure it was the user, not the airbrush...) David was shocked to hear not only that I used the airbrush, but I painted the Spit. He demanded proof of life. Here is it: 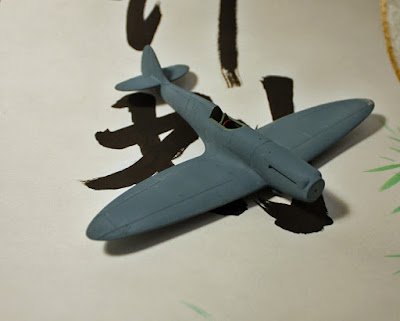 I broke out the micromesh and have smoothed out the finish. Look for a repaint and completion soon. Seems I also need to practice with the Grex.
Posted by AScaleCanadian at 1:00 PM 6 comments:
Labels: Modeling, Spitfire

On Saturday I attended the Shenango Scale Modelers contest in Sharon, PA for the first time. It was a small show, but there were many nice models on show. A few photos are attached of models that caught my eye. The vendor room was kind of weak and, shockingly, I purchased absolutely nothing... 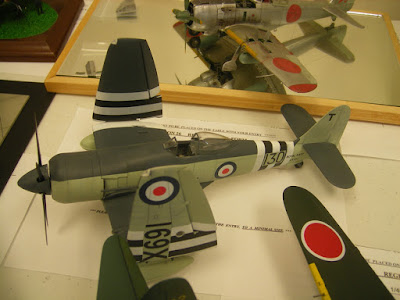 An old Airfix bus converted into the Pigeon Loft by Karen Rychlewski. 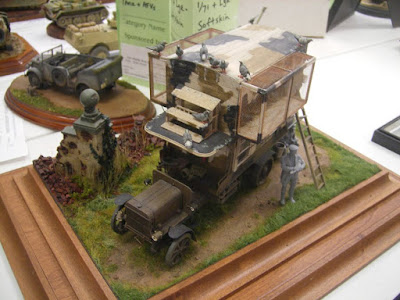 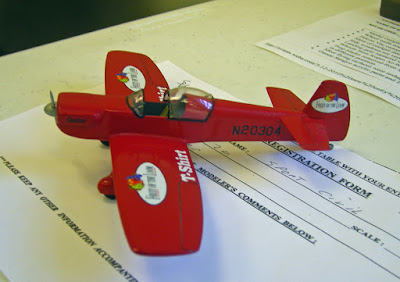 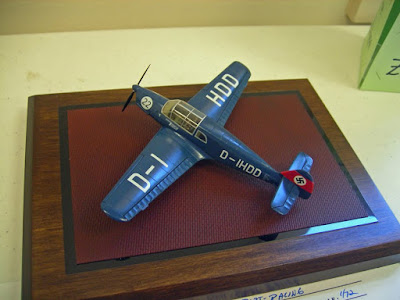 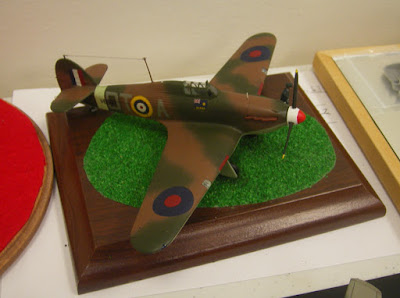 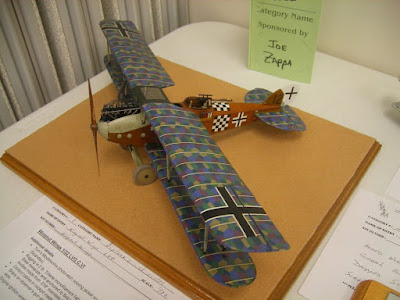 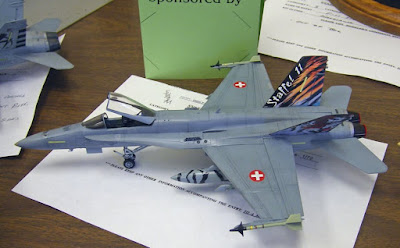 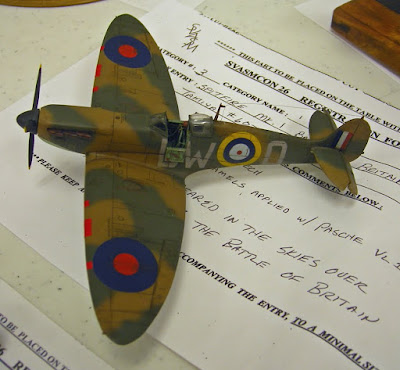 Posted by AScaleCanadian at 3:26 PM No comments:
Labels: Model Show 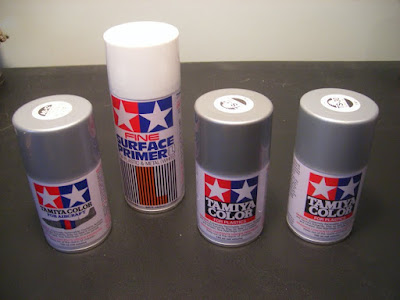 Like aircraft in natural metal finish? Lazy? Have an airbrush phobia? I use a fast and easy natural metal finish technique that almost completely relies upon spray cans. But not just any spray cans, Tamiya’s synthetic lacquer spray cans. Besides having a fine grain, and a natural metal look, they are lacquer based and will stand up to masking. In fact they are so durable, you can save time and cut down on clear coats as well. I also find that these cans spray so much smoother and easier than other spray cans I’ve experienced.

Step 1: You have two choices here, either have you assembled kit perfect with no flaws or relay upon a primer. I like Tamiya’s Fine Surface Primer (in gray or white, your choice) in the spray can. If I use a primer I do polish up the paint with fine micromesh before I apply the silver.

Step 2: Make sure the model is free and clean from dust and oils. I usually swab off the model with common drugstore isopropyl alcohol. (Sorry Gunze’s Mr. Whiskey will not work here…) After wiping off the model only handle it was latex gloves.

Step 3: Here is where the secret weapon is revealed. Tamiya AS-12 spray metal silver. I find that his paint leaves a beautiful slightly oxidized natural metal look. Not too shiny, but not too flat. Heat the can in warm water…but not on the burner…we do not want to send the can into space, just have the paint flow better. Shake well and apply in thin coats. In my experience silver enamels take forever to dry, but the lacquer dries super fast.

Spousal Interjection: Buy a spray booth. This stuff is smelly.

Step 4: The nice thing with this paint is that there are more options than just the AS-12. Tamiya also makes TS-17 Gloss Aluminum and TS-30 Silver leaf. If you wish to panelize you airplane, mask off panels and use either or both of these cans to add some panel variation. I find that the TS-17 leaves a nice silver doped look often seen on control surfaces. I usually mask with Tamiya tape or drafting tape. You can also mask off anti-glare panels, etc. at this time. See isn’t this paint fun? Mask all you want and nothing pulls off.

Step 5: If you are really lazy like me you can skip your clear coat and just apply decals. I usually use Future floor polish to apply decals to my natural metal aircraft. Either place a small amount of Future where the decal will be placed, apply decal, and cover in Future or just dip the decal in the Future and apply. The Future will suck the decal down into the panel lines, fuse the decal in place, and prevent silvering.

Step 6: Depending on how neat you are with your Future you can either finish the model as is or actually break out the airbrush and apply a final clear coat of your choice.

Wasn’t that fun? A nice metal airplane and no need to break out the airbrush. Sometimes it pays to be lazy.
Posted by AScaleCanadian at 12:58 PM 2 comments:
Labels: Tips and Techniques 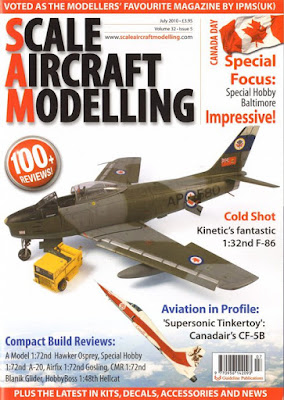 Sadly, nothing in this issues made me regret my decision to stop buying the magazine. The cover price is out of sight, and the content is thin. The editing is terrible and many details are overlooked. But hey, the pictures are nice...maybe some think that is worth $12. Not me.
Posted by AScaleCanadian at 8:31 AM 1 comment:
Labels: Magazine Review

Canadian Airmen and the Victoria Cross

Here is a rather neat website called For Valour about the seven Canadian airmen to win the Victoria Cross. I think this is a rather interesting approach to teaching younger people about actions of the Canadian medal winners, though I sure some of the hard core self professed "historians" will find it dumbed down.
Posted by AScaleCanadian at 7:25 AM 1 comment:
Labels: RCAF History
Newer Posts Older Posts Home
Subscribe to: Posts (Atom)