A neat news story about the Granger Taylor's "Kittyhawk." I use Kittyhawk in quotes as this was a kit bash of some P-40 parts, a Bolingbroke rear fuselage sections, a Harvard fan and rudder, and lots of scratch built items out of random metal. Granger rebuilt his P-40 and had it on display for a few years in Duncan, B.C. After Granger went off to space, it was sold to Bob Diemert of Carmen, Manitoba, and "restored" to flying condition with a Merlin engine in the markings of "Old Exterminator." It was registered in the US as N7205A and adopted the ID of RAF AK823/RCAF 1036. On the ferry flight to a new owner North Dakota on March 25, 1997, a landing gear leg collapsed and the aircraft was damaged. It is unclear what happened to the wings (I don't really believe the stories that any major parts from this Kittyhawk were used in the restoration of N4420K.), but the fuselage is now on display at the Dakota Territory Air Museum in Minot, North Dakota.

I'm not sure anyone knows for the sure which cockpit section Granger started with. (I understand that Mr. Taylor never tried to apply an ID to his project.) The adopted ID is suspect, because RCAF 1036 was ex-RAF AK815 and the RCAF never operated AK823. Some sources say the aircraft has some parts from RCAF 1044 which is also possible. The outer wings were from Kittyhawk AK803/RCAF 1034 now on display, and for sale, in Oregon.  (This aircraft had its wings hacked off and replaced with a set from another aircraft.)

Granger and Diemert are great characters and well worth reading about. (Heck, if their stories were in a movie I'm not sure you would believe them.) The CBC did a documentary on Granger called "Spaceman" and the National Film Board did a great documentary on Diemert called "The Defender." Both are on youtube and worth a watch.  Who says Canadians aren't unusual, eh?

Posted by AScaleCanadian at 3:02 PM No comments:
Labels: RCAF History

I've been pretty quiet the last few weeks, but, unusually, model progress was happening. These two had to be at the Museum of Flight for our 1945-47 display by 5pm. They were both finished about 4pm! 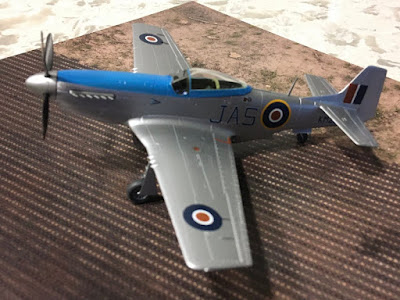 The Airfix 1/72 A6M2 done as a Zero captured and evaluated by the RAF using Max Decals. Unfortunately I didn't have time to add the chipping. I'll do that in a few months when it returns from the Museum. 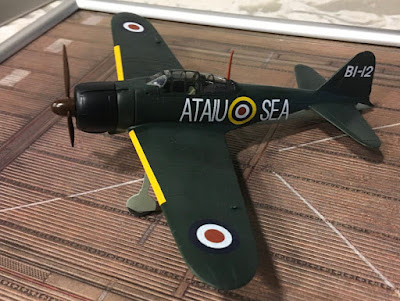 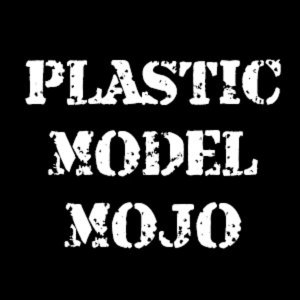 Apparently my friends at the Plastic Model Mojo podcast were hard up for a guest and asked me to join the show to talk about Fear and (self) Loathing in Scale Modeling.  As your attorney I advise you listen.  #scalemodelingpodcasts #aviationisolation #plasticmodelmojo